A Brief Introduction About Waiver Agreement

A Waiver Agreement is a legal agreement that is created between two or more parties when in a certain situation, either of them has either deliberately failed to take a certain action or wants to willingly give up their rights to a product or on the contents of a previous agreement. In the formation of such a contract, there are usually two or more parties involved, depending upon the number of parties who initially created the contract.

One of the most important aspects one needs to note about the contents of a Waiver Agreement and its legal execution in a court of law is the fact that this contract is only legally binding when either of the parties has voluntarily given up their rights without being forced by the other. Under no circumstances can one party force the other to give up their rights regardless of the scenario due to which such a situation has arisen.

In the creation of a Waiver Agreement, there are usually two or more parties involved. The first party in the creation of this contract is the party who is willing and or voluntarily giving up their rights, and the second party is the individual or party whom they are giving up their rights to. In legal terminology, the first party is always known as the Client, the second party is known as the Company, and the contract is referred to as the Agreement.

Purpose of the Waiver  Agreement – Why Do You Need It

The fundamental purpose of this agreement is to establish and ensure a proper understanding between both the parties. This entails that both parties are aware of their limitations, duties along with the rules and regulations they are expected to follow.

Contents of the Waiver Agreement – Inclusions

Effective Date: In this section of the agreement, the date on which the agreement was created and from when it will hold legally capable is mentioned.

Where does it Apply: A waiver agreement is binding across the state, city, and or country where it was created.

How to Draft the Waiver Agreement

A Waiver Agreement between the parties can be established by following the steps outlined below.

While negotiating the formation of a Waiver Agreement, it should be kept in mind that interests of the primary and the secondary party must be addressed along with the common cause.

Benefits & Drawbacks of the Agreement

The most significant benefits of having a Waiver Agreement are as follows.

Benefits of Having a Waiver Agreement

The simple benefit of having a Waiver Agreement in place is the fact that both parties are aware of what their actions are, the rules and regulations they have to follow, along with the terms and conditions that will be imposed.

This document serves as a legal understanding between both the parties.

Cons of Not Having a Waiver Agreement

In the absence of a Waiver Agreement, neither of the parties have legal proof of an understanding taking place between two entities, and thus if the matter is ever brought to court, both parties stand to lose.

What Happens In Case of Violation

In the case of violation of a Waiver Agreement, certain remedies come into effect, and in a few cases the contract is dissolved, and a new set of terms and conditions are agreed upon.

A popular opinion among the general public is that silence from a party can be rightly considered as a waiver of their rights. However, fortunately, this is not true. As mentioned in the introductory paragraph, a Waiver Agreement is legally binding only in the case where a formal notification is issued, and it is documented that the party has voluntarily given up their right without any intimidation and or pressure from external forces. 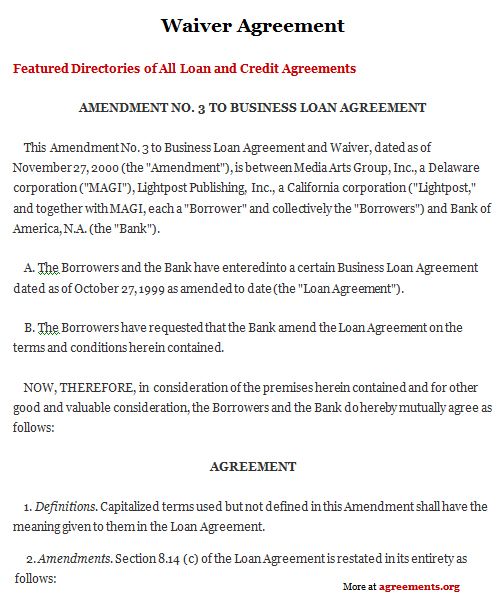