A voting agreement is a legal document that is created when a public company is being acquired by a target company and the public company’s stockholders to give their voting consent towards a merger. These legal documents outline the terms and conditions under which the public company is being acquired along with details of its merger and how the same should be processed. The main purpose behind the creation of a voting agreement is to make sure that all the processes are executed smoothly at both ends of the stakeholders and also assist the board members in negotiations during the merger.

One of the important aspects to note about this agreement is the fact that it outlines the exact rules and regulations that will be followed during the merger and how the board members will be elected once the same has been smoothly executed. It includes details of the voting terms, along with details of future mergers as well as accusations.

When Do You Need a Voting Agreement?

The most common application of such a contract can be found when either a company is being acquired by another organization or the company is being merged with another. This agreement outlines the terms and conditions of the merger as well as acquisitions that might follow the rules and regulations to be followed by the board members, along with how the voting rights will be allocated.

The creation of a voting agreement can also indicate that a deal has been closed between both the organizations, and now they can merge their voting powers to reach a unified goal.

Parties Involved: In the creation of this agreement, there are usually two parties involved; the first being a public company that is being acquired or merged into and the second being the target company, which is acquiring the public company.

Effective Dates: This section of the contract outlines the date from which the terms and conditions outlined in the contract will come into effect.

Where does it Apply: This agreement is legally binding within the boundaries of the state or city it was originally drawn at.

How to Draft a Voting Agreement?

Follow the mentioned steps in order to draw the agreement.

Benefits of a Voting Agreement

The benefits of having this agreement are outlined as below:

In the absence of a Voting Agreement, both parties don’t have legal proof of a transaction ever taking place between both the entities and therefore stand to lose if the matter is ever taken to court.

Notices: Both the stakeholders in the contract need to issue certain notices to each other, and this section of the contract outlines the details of the same.

Disclaimers: The parties involved in the creation of the contract need to provide certain disclaimers to each other, and this section contains details of the same.

Remedies: In the case of a lapse in agreed terms and conditions or a default in payment, certain remedies immediately come into effect, the details of which are enclosed in this section of the contract.

Obligations: Both the parties have certain obligations to each other, during, and after the creation of the contract, the details of which are mentioned here. 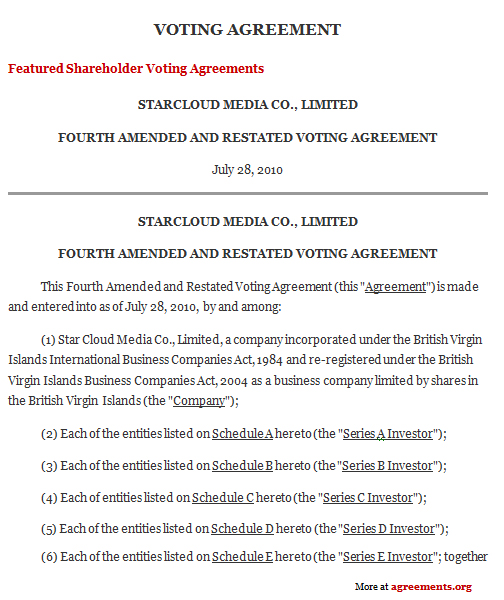