A termination agreement is a document formally expressing that every single contractual party agrees towards the cancellation of a contract. This  agreement is also termed the following:

When Is Termination Agreement Needed?

A contract is terminated when one party chooses to exercise a right to bring the contract to an end.  That right arises (1) at common law and/or (2) by the express terms of the contract.

Purpose of a Termination Agreement

A termination agreement states the obligations that survive the termination. The parties in the original contract should sign the agreement.

These agreements state that the involved parties have come to a mutual conclusion to end the contract. They might incorporate an optional mutual release of claims. A business termination agreement formally ends a business relationship. It generally includes a business and an individual or two enterprises.

Inclusions in a Termination Agreement

In a termination agreement, the information that is required to be comprised of are:

In a few cases, termination agreements are mutually agreed upon amid the involved parties. These agreements are part of good business practice and should protect the best interests of all involved.

How to Draft a Termination Agreement?

The process to draft this agreement is;

This agreement states who are involved in the termination, the purposes for the cancellation, and how and when the termination happens. When applicable, you might also incorporate a detailed scope of severance pay. The agreement sets a date for termination. It additionally incorporates the individuals involved and the signing date of the original contract.

A Termination Letter for termination of an agreement is used by a party to let the other party know that they wish to terminate the agreement before the expiry of the term of the agreement.

A letter of termination of employment, also known as an employee termination letter, pink slip, or letter to fire an employee, is created to inform an employee their job is ending and explain the reasons for the decision.

Sample of a Termination Agreement

A sample of the Termination agreement can be downloaded from below. 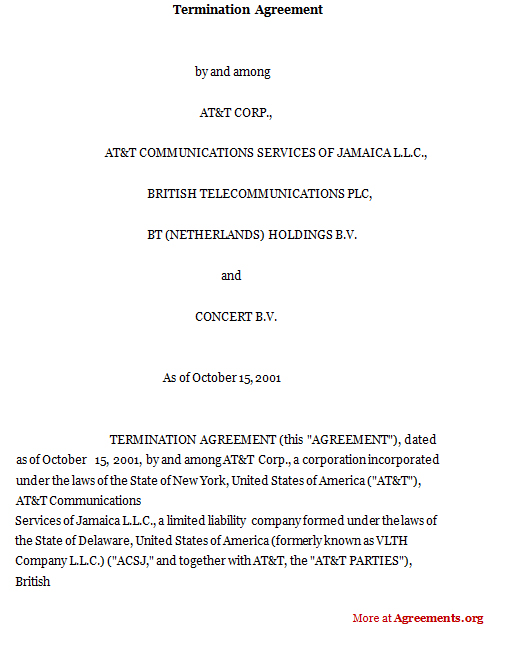