What Is a Tax Sharing Agreement?

A contractual agreement created to define the economic expectations among members of a group of corporations used to consolidate/combine tax returns is called a ‘tax sharing agreement.’ In other words, such an agreement describes the situations when one member of the group be expected to owe or receive economic consequences for its tax items.

Who Are the Parties Involved in a Tax Sharing Agreement?

A Corporate Tax Sharing Agreement is an agreement negotiated by the senior management of both the parent company and the subsidiary. It recognizes the full value of the benefit and tax-sharing liability.

What Is the Purpose of a Tax Sharing Agreement?

What Are the Contents of a Tax-Sharing Agreement?

How to Draft a Tax Sharing Agreement?

Points  to be kept in mind while drafting

What Are the Benefits and Drawbacks of a Tax Sharing Agreement?

Most breaches of a TSA include non-payment of taxes by a subsidiary. The go-to option in such scenarios is indemnification.

Indemnity clauses in the agreement, protect the other members of a group from the violation or breach of the dealings. So, in the case of unpaid taxes by any subsidiary, a third party, or a group member acts as an indemnifier of the losses.

While the idea of a Tax Sharing Agreement seems like a good one, there are a number of considerations that go into its success. From reasonable allocation to considering the taxable nature of subsidiaries, a TSA involves a large number of complications. While one solution has a separate TSA with each of the subsidiaries, it would still require a far greater degree of certainty and resources. All and all, highly skilled accountants need to be involved in examining the range of factors that influence the division of tax payments in such an arrangement. More importantly, in case the arrangement breaks off, there needs to be indemnification measures taken. While TSAs ease the burden on a single parent company, they bring in a lot more complex calculations, some of which are unreasonable to be imposed on young players in the corporate world.

A sample of the Tax Sharing Agreement can be downloaded from below. 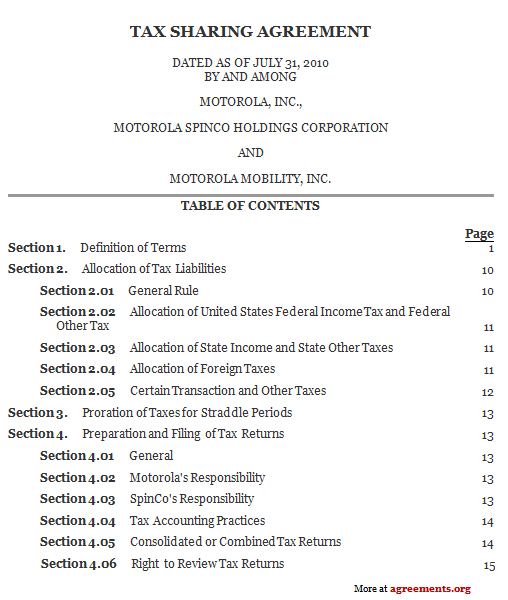