A Brief Introduction About the Subscription Agreement

A subscription agreement is entered into between the company that wishes to raise capital for its business by selling its shares and the investor who wishes to purchase the shares and invest in the company.

Purpose of the Subscription Agreement – Why Do You Need It?

The purpose of a subscription agreement is to lay down in writing the terms under which the shares will be sold to the investor. The agreement will contain the important particulars of the deal, such as the number of shares that the investor will be subscribing to and the price at which such transaction will take place.

This agreement is needed whenever a company wants to raise capital from private investors. It helps a small company or a startup to raise capital for its business without going public. Such companies may not have the means to make the company public or to collaborate with a venture capitalist. Once the agreement has been created, the details of the transaction cannot be changed. This helps to solidify the intention of the parties, and a party cannot renege on the deal at the last moment.

Contents of the Subscription Agreement

The key terms of a subscription agreement are as follows:

How to Draft the Subscription Agreement?

While drafting a subscription agreement follows these steps:

The company and the investor must decide all the important terms that relate to the subscription of shares, such as the purchase price, when the transaction will be completed, etc.

Benefits and Drawbacks of the Subscription Agreement

The following are the benefits and drawbacks of having a subscription contract:

In case the investor does not perform its obligations under this agreement, the company may have a number of options available. The company has the right to rescind the contract, and hence, the ownership of the shares shall not be transferred to the investor. If there is a breach on the part of the investor, the company may be able to recover damages or any other relief that may be deemed to be equitable.

In conclusion, a subscription agreement is a necessary agreement whenever an investor decides to invest in a particular company. This agreement is needed to cover the specifics of the entire deal. Early-stage companies use this agreement as a mode of raising capital. It is a relatively easier process than approaching venture capitalists. 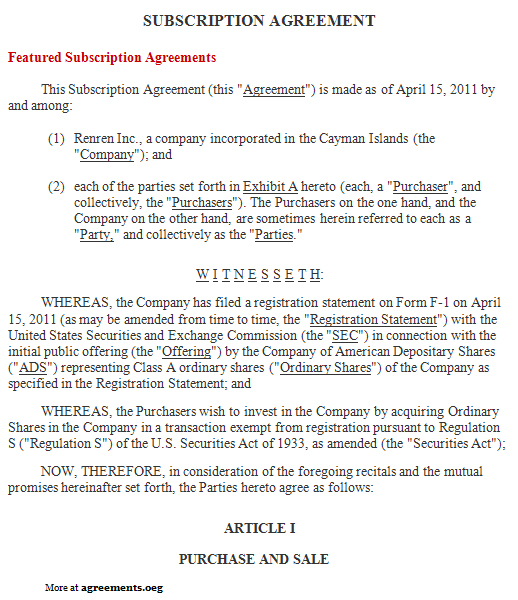