As the name suggests, the subordinated loan agreement is a legal document that ranks debts in priority for collecting repayment from a debtor. Priority becomes crucial in case of bankruptcy or default on payments. These agreements are usually most demanded in the arena of mortgage on real estate properties.

Once entered into this agreement, a secondary lender can only collect the money (in case of liquefaction), if and when the primary lender’s debts are payed off.

This loan agreement is generally used by individuals or businesses in order to increase their net capital at a moment of time, without risking several assets in the process.

When Do You Need Subordinated Loan Agreement?

Lenders need this agreement if the borrower needs more money than loaned by them. A subordinated loan agreement helps them in securing a priority position in case of debt repayment. Borrowers need the same agreement in case their primary lenders are asking for a guarantee that their loan repayment will take precedence over any secondary lender.

The purpose of a subordinated loan agreement is to safeguard the rights of a primary lender in case a business faces foreclosure.

This agreement is also used by secondary lenders to invite primary lenders with a promise that they will be repaid first, thus giving them an extra layer of protection against financial risks.

To create the subordinated loan agreement, at least three parties need to be acknowledged: primary lender, secondary lender and the borrower. A collateral against which these loans are being allotted need to be mentioned in the document as well.

A date from when this agreement is effective needs to be mentioned. Place of agreement, monetary value of funds allocated and full legal disclosure regarding this loan from the secondary lender is needed.

How to Draft a Subordinated Loan Agreement?

Confused about how to go ahead with drafting of a subordinated loan agreement? We will tell you when and how you need to get the draft made, read below:

An agreement that puts one party in prior position then other tends to have pros and cons. Read below: 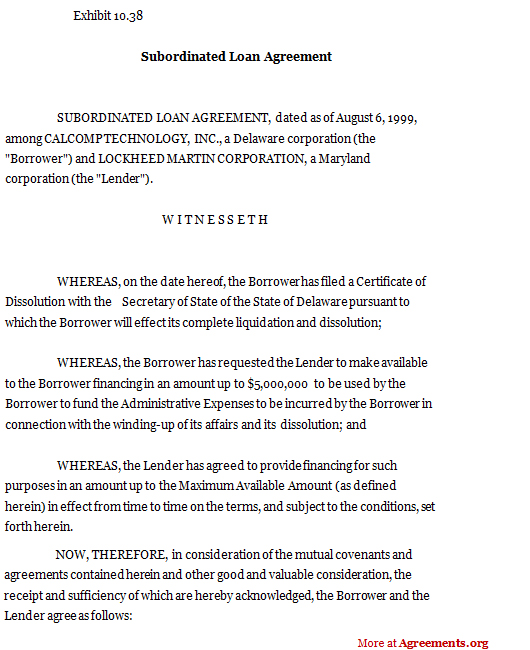