What Is a Standstill Agreement?

Most standstill agreements are used to delay action for a set period of time due to various reasons. It is also used to prevent hostile takeovers. It can also be used to arrive at an agreement between the two parties to not to deal with a third party for a pre-decided period of time. And most importantly, it has often been used to extend the statutory limitation period.

There are many types of standstill contracts. Some of them are an agreement to/during:

Who Takes the Agreement?

The agreement is taken by those who want to preserve the things as they are.

Purpose of a Standstill Agreement

There are many purposes of a standstill agreement:

One of the most important terms of a standstill contract is the ‘extension’ of a time period and not just its ‘suspension.’ This applies especially in the case of agreements drafted for extending the limitation period.

A standstill agreement must include:

As there isn’t much time before the limitation period expires or when the deadline for a certain action to be carried out is near, many standstill contracts are not drafted well. A poorly drafted standstill agreement is a huge loss for the parties to the contract as they may not be able to enforce it as well as they would have with a well-drafted agreement.

The agreement is generally divided into parts of:

These following guidelines can be kept in mind while drafting such agreements:

In the case of the standstill agreement, negotiation strategies can prove helpful even after the agreement is signed – to make the best use of the extra window of time and take decisions in the best interest of the company or an individual.

Benefits and Drawbacks of a Standstill Agreement

In the case of standstill agreements, the drafting is important, which is why you must refer to an online template or hire an attorney. A standstill contract provides protection with these agreements are time-extenders and those that help in keeping things ‘as is’ for a decided period of time. 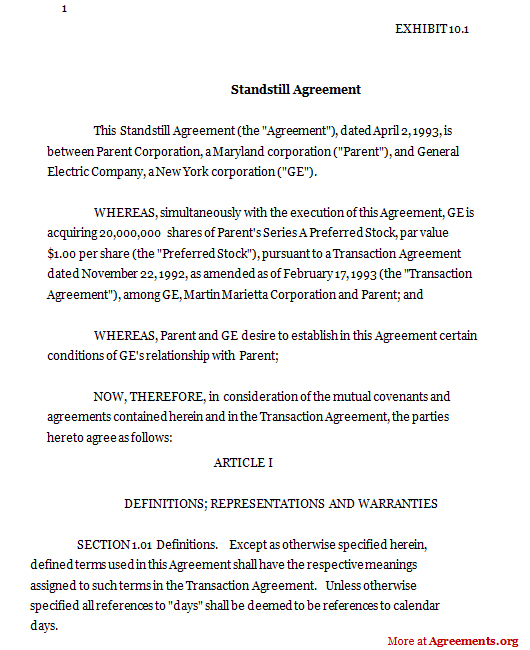