What Is a Software Reseller Agreement?

Who Are the Parties to a Software Reseller Agreement?

What Is the Purpose of a Software Reseller Agreement?

A software reseller contract is created for the following purposes:

Contents of a Software Reseller Agreement

A software reseller agreement consists of the following terms and conditions:

How to Draft a Software Reseller Agreement?

An effective agreement can be drafted, keeping in mind the following:

In the event, a software reseller agreement is violated or the breach, the parties can demand damages for such breach or replacement of reseller or approach the courts, or they can sit together and resolve the issue by mediation, arbitration or other such alternative methods of dispute resolution. Methods of dispute resolution and the choice of law/jurisdiction should be mentioned in the agreement itself.

This agreement is an effective way to reach different markets and regions, removing all the obstacles like owner’s physical presence, the dearth of sales channels and contacts in the customer’s country, local language issues, local laws, and regulations. But sometimes the parties to the agreement indulge in anti-competitive practices, and it may lead to a very large fine and penalty based consequences. Hence parties must assure that they are complying with the anti-competition laws and local laws and regulations.

A sample of the Agreement can be downloaded from below. 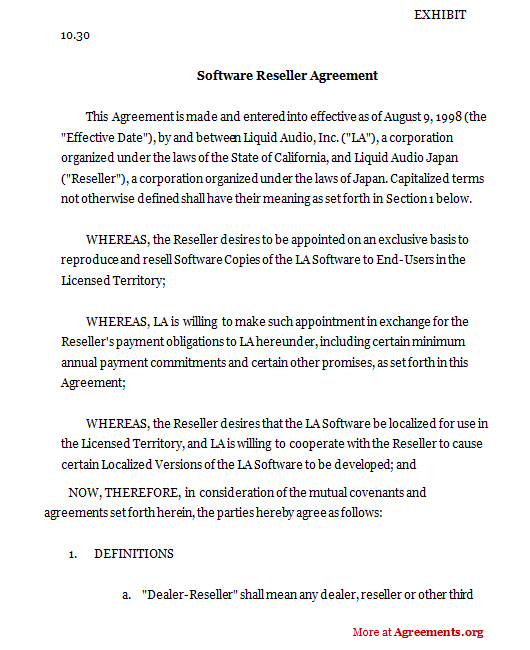