A Brief Introduction About the Software License Agreement

What is a software license?

The definition of software license is the rights to use proprietary software given to the customer by the company. There should be complete clarity with regard to copying, modification, or redistribution of the software.

How to license software

The software can be licensed in many ways such as true-open source license, where you own the code but need to give the author credit for it. There are other licenses where the original product’s name cannot be mentioned.

There are licenses where the software can be used, modified, distributed, and run by anyone.

What is a software license agreement?

This is an agreement between the owner of the software and the customer, where the latter has the rights to use the software.

The different types of software license agreement are:

You can create an agreement using a software licensing agreement template.

Purpose of the Software License Agreement – Why Do You Need It

The reasons for having this agreement are:

There are certain important clauses that must be part of a software licensing agreement to ensure that it is effective.

The following should be part of an agreement checklist:

How to Draft the Software License Agreement

While drafting a software licensing agreement, the following points need to be kept in mind:

The key terms of a software license agreement are:

Before entering into a software license agreement, it is important for both parties to agree to decide the terms and conditions. The developer will negotiate the best rates from the customer, and the customer will try to ensure that the best benefits are available at the most competitive price.

What Happens in Case of Violation

A software license agreement is entered into by a developer and a customer to ensure that the customer does not misuse the right or make unfair gains from it.

Any software license agreement sample can be found online, and you can see the terms and conditions of the agreement.

If the client violates any clauses in the contract, then the license will be canceled. The fee paid by the client will not be refunded. The penalty will depend on the applicable laws of the state.

Before the client signs the agreement, he or she should read all the terms and conditions in the agreement and sign the contract only when he is clear about all the clauses. This will minimize the chances of a violation.

A software license agreement is beneficial for both the software developer and the customer. The developer gets a regular income stream for the duration of the contract, and the client gets the software rights. 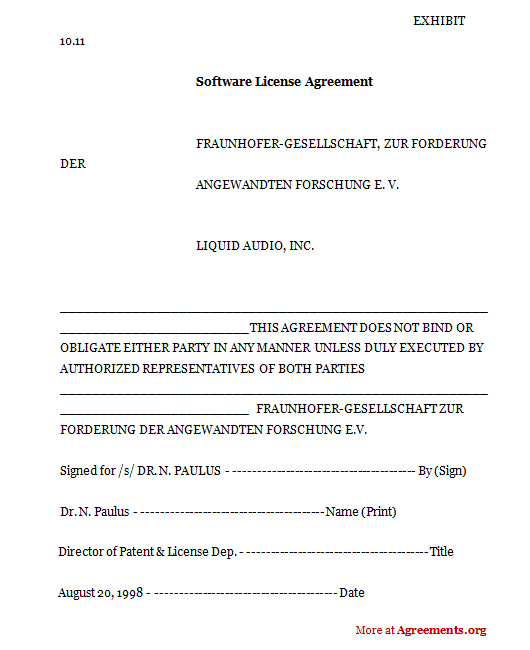