A Brief Introduction About the Agreement

What Is a Shareholder Agreement?

An agreement among some or all of the shareholders of a company is known as a Shareholder Agreement. It highlights their rights and obligations and protects the interests of both the minority and majority shareholders. Its contents depend on the situation of each company but generally include clauses on the voting rights of the investors, rights in the event of the sale of the company, transfer of shares agreement, and confidentiality. The Articles of Association(AOA) of the company generally include these clauses; however, they may not be as detailed.

Who Are the Shareholders of a Company?

A shareholder is anyone who legally owns one or more shares of any private or public company. For the purpose of this agreement, we will consider only the shareholders holding equity shares and not preference shares. Equity shares give their holders an ownership right in the company.

What Are the Ownership Rights the Shareholders Have?

With the virtue of being a shareholder, the primary ownership rights granted to them are as follows:

As discussed earlier, the SHA is an agreement between some or all members of a company. In some cases, the company may also be a party to the agreement since it concerns the daily operations and events of the company.

Purpose of a Shareholder Agreement: Why Do You Need It?

In the case of private companies, where there is a restriction on the number of shareholders, and the directors are usually the shareholders, the agreement is important to help protect the minority holders.

The purpose of the agreement is mainly to:

It is recommended to execute a shareholders’ agreement. However, there is no legal requirement for it.

The main inclusions in a shareholders’ agreement can be seen below:

How to Draft the Shareholder Agreement?

Points to Consider While Preparing the Agreement

When writing a shareholders’ agreement, you need to keep the following in mind:

Shareholders’ agreements can be divided into the following two types based on the shareholding of the members:

As discussed above, based on their shareholdings, different shareholders will have a different priority from the agreement. The parties need to find common ground and draft the agreement accordingly.

Benefits and Drawbacks of the Shareholder Agreement

As discussed in multiple clauses above, the benefits of the SHA are as follows:

The drawbacks of the agreement are as follows:

The shareholders’ agreement is an important document for any company as it provides a predetermined set of rules and regulations to be followed and provides for conflict resolutions.

While drafting the SHA, one must very carefully consider the needs of all the parties involved as there is no particular framework set out for it and solely depends on the requirements of the company. 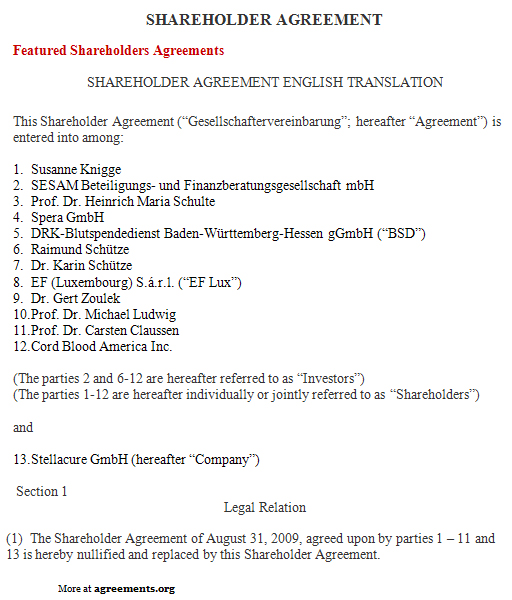