One of the most important aspects that makes this contract different from other shared Collateral Pledge Agreements is its legal ability to lend out funds. The sum of whose entirety may be greater or lesser than the total value of the asset that is being used as a collateral in this transaction.

When do you need a Shared Collateral Pledge Agreement?

The most common application of a collateral sharing agreement can be found in real estate projects, where a group of developers may request funds from different banks, while using the same real estate property as a security to deliver those funds. In these cases, the consortium of lenders, assign a lead lender who is responsible for disbursing all the funds, manage the paperwork and also collect back the funds with interest. This common lead is most commonly denoted by the term, agent, in the context of a Shared Collateral Pledge Agreement.

The agreement is a legal documented proof that clearly mentions all the details about the consortium of lenders, the agent that has been assigned, the total value of funds that are being disbursed, value of the assets which has been used as security and many other finer details.

Parties Involved: In the context of a Shared Collateral Pledge Agreement – There are mainly two parties involved; the first party is the consortium of lenders who are denoted by the term, ‘The Secured Party’, and the common group of Debtors who are denoted by the term, ‘Debtors’. The Secured Party in most cases involves 2 or more financial institutions and the Debtors usually include multiple debtors.

Effective Dates: In this section of the legal agreement the important dates of the contract are clearly mentioned. This includes, the date wherein the transaction will begin, the date the funds will be disbursed, the date on which the asset was valued, and the date by which the funds need to be reimbursed along with interest.

Where does it Apply: This contract is legally binding in the state or city premises it was drawn at. In some cases, out of the state laws might also be applicable and this document can be used as a standing legal proof.

How to draft a Shared Collateral Pledge Agreement

Drafting a Shared Collateral Pledge Agreement can be easily achieved by following the steps mentioned below.

Arrange a meeting between the group of debtors and the consortium of lenders who will be issuing the funds in context. Mutually discuss the terms and conditions under which the funds will be issued, the rate of interest that is acceptable to both parties, the current value of the asset that is being used as a collateral, and other important details.

Once the discussions have come to an end, reach out to your legal team, either internal or external, and ask them to chalk a draft Shared Collateral Pledge Agreement for both the organizations.

Cross check and verify all the details with both the organizations and get signatures from the authorities. File the legal document in the state or city House of Law as suggested by your legal team.

The benefits of having a Shared Collateral Pledge Agreement are far and wide. Mentioned below are some of the most significant ones.

Advantages of having a Shared Collateral Pledge Agreement

Cons of not having a Shared Collateral Pledge Agreement

Key Terms and Clauses in a Shared Collateral Pledge Agreement

Disclaimer: In this section of the legal agreement, the disclaimers that need to be issued to both the consortium of lenders and the debtors are clearly mentioned and outlined.

Notices: In the context of creating  such a document, there needs to be a set of notices that will be issued to both parties. This section of the document outlines the details of the same.

Remedies: In the case of a lapse in payment or anything else from either side, there will be certain remedies that come into action and this section of the legal document outlines the same.

Obligation: There are certain obligations that both the stakeholders have for each other; for example, the value of the asset that is being used as security, when the funds will be returned etc., and this section outlines the same. 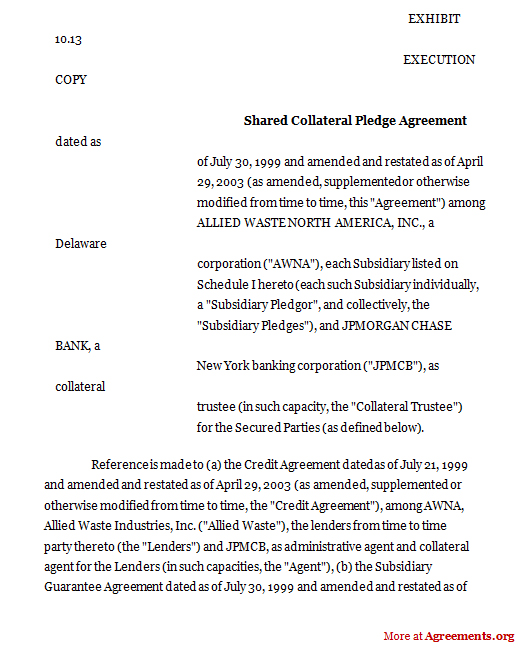