Share Entrustment Agreement or Shareholder’ agreement is formed between members of a company or shareholders. It is also compared to a partnership agreement. There are some particular consequences of the agreements, but it also carries specific advantages to the members. This agreement helps in improving the confidentiality amongst the company and ensures that everyone gains benefits.

What goes into making a shares trust agreement? The parties, clauses, and obligations toward each other, which are well explained in our sample share entrustment agreement.

This agreement is taken by the shareholders of the company. It can also be signed by a member of the company, which helps them to avoid leaking anything to the public.

Most of the company’s documents are available for public inspection, but in case of the shareholder’ agreement, it becomes a private law contract, which cannot be shared. This serves the purpose of its application, as it helps in providing confidentiality between the parties to ensure that these documents remain protected. The agreements are quite cheaper, which is another reason why they are available in many companies.

There are various types of private information available in the Shareholder’ agreement and all this information remains protected. The information in the contract varies from company to company. However, it should include

This agreement helps in allocating the shares to the members of the company so that it can restrict the disputes. These clauses are well-defined in a startup share entrustment agreement as well.

If you want to form this agreement, then you have to follow specific steps.

The negotiation is handled by the legal team of both parties. After complete research, one party can make an offer regarding the agreement and if both of them agree to it, then it will be written in the contract.

The company can maintain the privacy of all its information by using this agreement. It can help in keeping all the private information confidential to ensure that they can do their business without any issues.

The major drawback of that it has a limited effect on third parties and to make any kind of changes in the articles, you have to spend a considerable amount of time on it, as all the deals between the shareholders, the middle man, and the company will be done by the documents organized by the company.

This agreement has certain risks as the shareholder can intentionally change the dormant shares. They can also abuse voting rights, which can give rise to a lot of problems. In case of violation, the shares might get frozen and executed by the court.

Finally, this Agreement helps in providing a lot of benefits to the company. They can keep all the information private and secure so that they can work without any type of worries. These help in maintaining the privacy and ensure the complete safety of data. 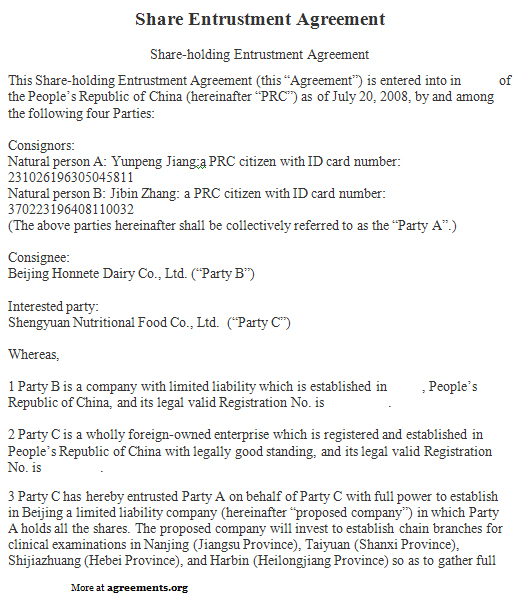