What Is Severance Agreement and General Release?

A general release is an agreement not to sue; it waives the right of an employee to sue the employer and “releases” employer from legal liability for claims the employee might have against it.

When Do You Need a Severance Agreement and General Release?

Many employees don’t have a legal right to receive a severance package when their service is terminated. However, because severance agreements could help reduce an employer’s legal liability, several corporations offering severance packages irrespective of whether they are expected to do so.

What the former company is offering the employee? probably severance pay, health-care coverage, or a continuation of the employee’s benefits, as opposed to what the employee agrees to give up, that is any legal claims employees might have against your former company arising from the employment or the termination.

The key terms of a severance agreement and general release should contain are;

Inclusions in a Severance Agreement and General Release

Parties involved: In the creation of this agreement, there are usually two parties involved; the first being employer/company and the second is the employee.

Where does it apply: Severance agreement is a legally binding contract between private parties and are governed by California contract law.

However, there are many additional issues a company might ask for employees to waive the right to sue the employer for the legal claims indicated in the release.

In a general release, there are few opportunities to seek some legal recourse against your former company, reliant on the type of claim the employee wishes to bring, the remedy the employee seeks, or the time when the underlying event occurred.

The severance package might include some of the following:

General release claims also include, but are not limited to:

What Happens When You Violate The Severance Agreement and General Release?

If an employer has contractually agreed to pay severance, it should honor that promise. Otherwise, the employee could sue for breach of contract 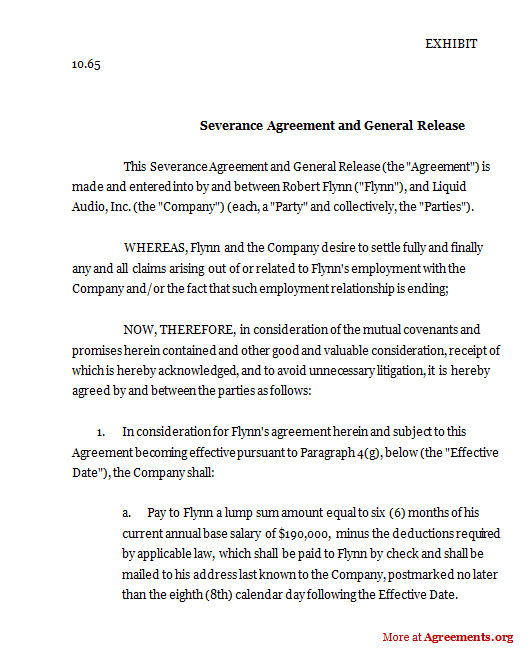