A security agreement is a contract that creates a security interest in a property or asset, which is kept as collateral with the lender for the purpose of availing loan by the borrower. A security agreement refers to the main loan agreement and includes the description of security, the conditions, and terms which govern such security, etc. Typically, this agreement is made part of the original loan agreement and can be appended to the same. A security agreement sample may be a bipartite or tripartite contract. Typically, holding companies and not the actual company availing loans can become a guarantor and furnish security to enable the subsidiary to avail the loan. Hence, the borrowing company, the guarantor, and the creditor, all three can become parties to this agreement.

Purpose of a Security Agreement

A security agreement serves the purpose of having well-defined security, acting as a guarantee or collateral to the loan advanced. This helps in assuring the creditor that his money would be returned, one way or the other, and at the same time, it also helps in the borrower availing loan in lieu of the security.

Inclusions in a Security Agreement

A security agreement typically includes the names of the parties, effective date, description of security, the value of the security, the money advanced, the redemption procedure, the ways in which the security can be used, etc. Apart from the commercial and operational terms, it also includes standard boilerplate clauses such as a waiver, notices, severability, remedies, choice of law, and dispute resolution.

A sample agreement would typically contain the following key clauses:

Following guidelines should be followed in order to draft an effective security agreement template:

Types of a Security Agreement

A security agreement can contain the following types of collateral:

Pros of a Security Agreement

Following are the pros of a security agreement:

A security agreement enables a creditor and a borrower to safely and securely enter into a loan agreement. By making the creditor a secured creditor it protects its interests. Despite, the terms and conditions being well-documented, a security agreement’s breach has many serious implications, including the creditor losing his options of getting repaid. Arbitration and litigation both should be set out as methods of dispute resolution in the contract. 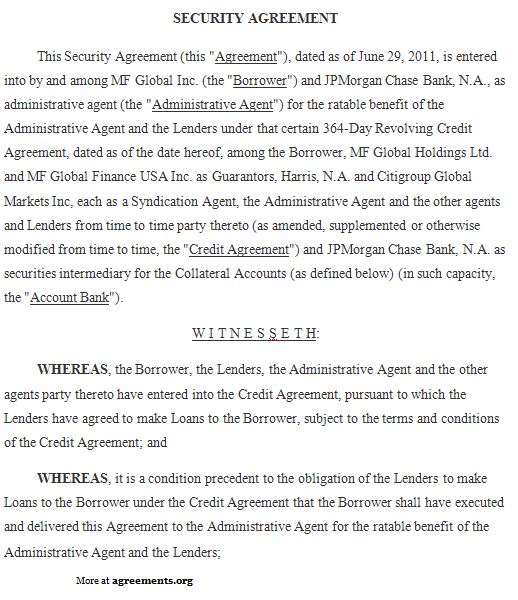