What Is Securities Purchase Agreement?

A securities purchase agreement is an agreement between a buyer and a seller for the transfer of shares in a company. It is also known as the stock purchase agreement. The buyers and sellers can either be corporations or individuals who hold shares in the company. It is a legally binding contract and lays down the terms of the purchase. It is governed by both federal and state securities laws, which are often difficult to understand. Therefore it is advisable that parties seek appropriate legal help.

The securities purchase agreement puts the conditions of purchasing securities down in writing. Dealing with securities can get complicated. For instance, some securities earn regular dividends. In the absence of this agreement, the purchaser may claim that they were promised dividends on the securities. This issue can be avoided by explaining the dividends in the agreement. It also has terms related to dispute resolution, which make the parties aware of how a dispute under the agreement will be handled.

This agreement saves time and cost spent running around different forums for a remedy. It allows the company to control its ownership. If a purchaser buys a large amount of stock that gives him ownership in the company, the latter can insert provisions in the stock issuance agreement that do not allow the purchaser to sell the stock directly to outsiders without first offering it to the company.

Some of the key terms to be included in the agreement are:

How to Draft the Securities Purchase Agreement

The following points should be kept in mind while drafting the agreement:

A securities purchase agreement is of the following types:

A sample of the Securities Purchase Agreement can be downloaded from below. 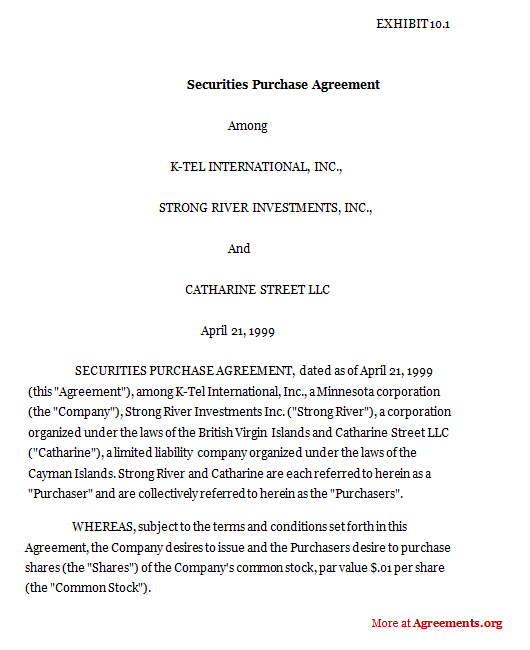