A Secondment Agreement is a legal document which is created between two parties, when the later needs to second some employees of the former organization due to an urgent need or a project.

When Do You Need a Secondment Agreement?

A Secondment Agreement may come into use in a couple of possible scenarios, for example if the Secondee deems a larger team for the completion of a project and therefore requests another organization to send them some additional employees, to promote cross corporate culture among employees, to exchange employees based on skill sets and to encourage them to grow their skill sets by working in a different office setup for some time.

The important aspect to note about employee secondment agreement is the fact that it doesn’t completely transfer the employees of one organization to another, but rather does so only for a short while in order to promote growth in skill-sets and cross corporate cultures.

How to Draft a Secondment Agreement

Kindly follow the below mentioned steps to draw a secondment agreement template:

The benefits of having an agreement are many. Mentioned below are the most significant ones.

The contract is a legal proof that a transaction has taken place between the said organizations and therefore if ever required, the same can be produced at a court to act as documented proof.

The contract clearly mentions the terms and conditions of the exchange, the dates from which it will come into effect and also the total duration of the exchange, so that both parties are clearly aware of all the details.

In the absence of this legal agreement, both parties stand to lose if the matter is ever taken in court due to lapse in terms or in specifications mentioned. 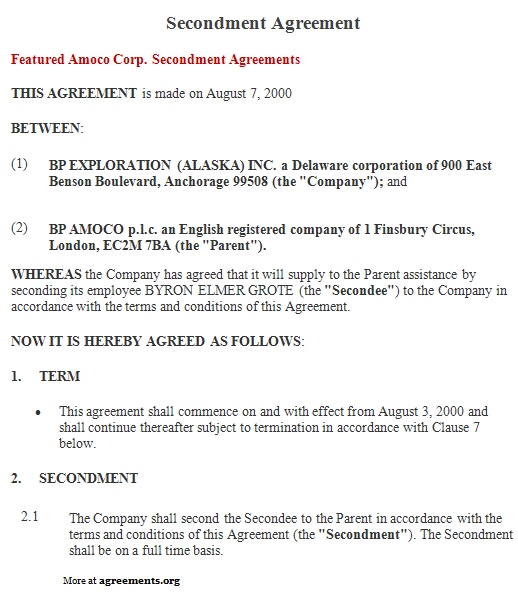