The requirement of a second loan modification arises in case the borrower is unable to repay the loan amount within the terms and conditions of the existing loan and wants to extend the duration of the loan tenure to repay the same.

What Is the Second Loan Modification Agreement?

A second Loan Modification Agreement includes changes made in the original loan document by a lender. This modification may include interest rate reduction, an extension of the duration of time for repayment of the loan, converting it to a different loan or combination of the mentioned three modifications.

A Second Loan Modification Agreement is taken by a borrower who is suffering from some kind of financial burden or crisis and is unable to repay the loan taken by him under the actual terms and conditions.

What Is the Purpose of the Second Loan Modification Agreement?

The main purpose of this agreement is to provide an extension of the duration for repayment of the loan by the borrower who is facing any sort of financial crisis. The aforesaid agreement can be termed as a long term solution for a financially weak borrower.

The following are some of the contents of a Second Loan Modification Agreement;

How to Draft a Second Loan Modification Agreement?

The following is the process to draft a Second Loan Modification Agreement;

There are two ways to seek professional assistance while negotiating a second loan modification agreement. The professionals

However, it is to be noted that the most successful loan modification process can only be negotiated by a successful and experiences legal attorney.

Mortgage loan modifications are considered as one of the common things as a large amount of money is involved in this. Considering the foreclosure crisis that happened back in the year 2007 and 2010, various governments are establishing second loan modifications programs for the borrowers, which provide them assistance and sponsorship.

One of the most important advantages is that it provides a short term permanent relief to the borrower as it can reduce the rate of interest. On the other hand, it creates a burden for the borrower when we consider it for a longer-term as it can affect the credit score of the borrower.

What Happens in Case of Violations?

A second loan modification agreement can be regarded as a short term relief for the borrower as it aids to tackle the financial problem temporarily. However, it is up to the lender whether he wants to modify the loan during the process of settlement. A loan modification agreement is granted to successful applicants who are represented by legal experts and also have some access to government programs. 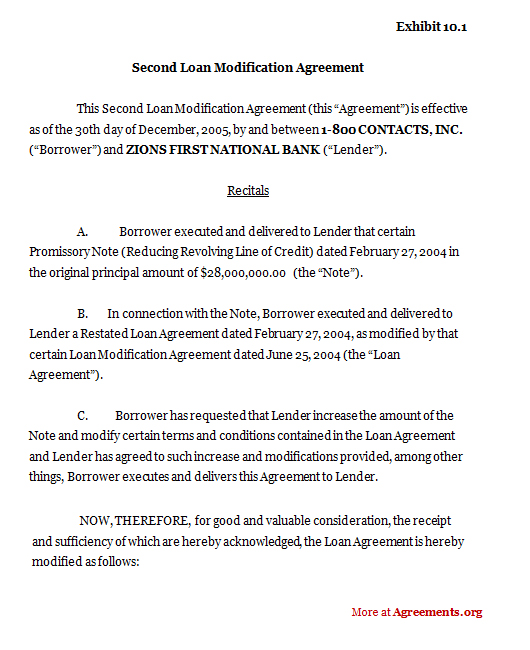