A sales representative agreement is a contract between a company and the people or organizations involved in selling its product or services. It defines various conditions related to the work, such as where the representatives will work, what product/service they will sell, where they will operate, and how they will be compensated. A company that wishes to engage independent sales representatives can opt for this agreement as it eliminates the need to have a formal sales team. This is especially beneficial for small businesses that have newly started out.

Purpose of a Sales Representative Agreement

Having this agreement allows a company to sell its products or services the way it wants. It can prescribe various conditions, such as what products/services will be sold and where thereby allowing the company to control the sale of the product/service. The sales representatives connect directly with people, so it is important for a company to ensure that they correctly promote the product/service. The agreement also outlines the duration of the arrangement and the compensation to be paid to the representative.

Another advantage of the agreement is that it is a cost-effective way for a small company to have an independent sales force, without spending too many resources on hiring an entire sales team. Having a written agreement minimizes the chance of a dispute due to uncertainty. The agreement serves as a blueprint for the relationship between the parties. In this case, the company and the sales representative are aware of their responsibilities under the agreement and hence can work smoothly.

How to Draft the Sales Representative Agreement?

Clearly state that the representative is not an employee or partner of the company.

A sales representative is a professional who is engaged by a company to sell its product or service. Most of them work directly for the manufacturer of the product and sell it to other organizations that further sell it to the consumers.

A Sample Sales Representative Agreement can be downloaded below. 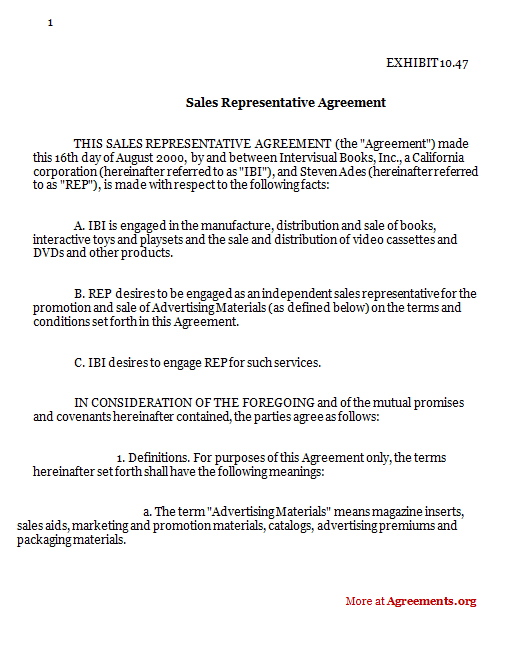