A right of first refusal can cover almost any sort of asset, including real estate, personal property, a patent license, a screenplay, or an interest in a business.

Typically, right of first refusal is used in share purchase and share acquisition agreements. For example, a shareholder of a company before selling off his shares to an outside third party has to offer them to the promoters first. These clauses also termed as ROFR are generally accompanied by call and put options.

Purpose of Right of First Refusal?

A right of first refusal is usually requested by an individual or company when it wants to see how a business or opportunity will turn out. The right holder may prefer the option to get involved at a later point, rather than make the outlay and commitment up front. Right of first refusal allows them to do this. They don’t need to commit now, but will have the first chance to commit (before others) if they decide to.

The following are the key terms or variations of a right to first refusal agreement:

Drafting of  Right of First Refusal?

There are a number of factors to be considered when drafting a right of first refusal:

The commodity or property, subject to the right of first refusal must be clearly defined, and the purchase price or formulae must be determined.

Typically, a right of first refusal is used in the following agreements:

The right of the first refusal plays to the advantage of the holder. Below are some of its benefits:

A Right of First Refusal agreement is typically drafted to gain the first mover advantage. However, its enforceability still remains a cause for concern. Typically, arbitration is resorted to in the event any disputes arises with respect to right of first refusal agreements. 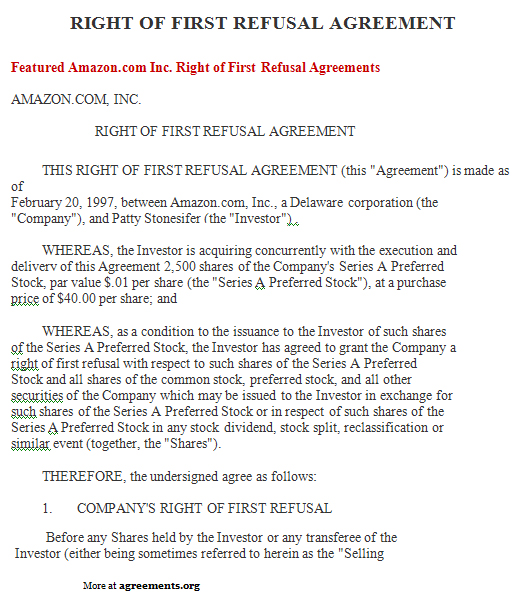