A Restructuring Plan Support Agreement, also commonly referred to as a lock-up agreement, is used by a company and its key constituents to contractually bind each other to the material terms of a restructuring proposal. It is intended as a general drafting aid and will require modification according to the particular circumstances and the intentions of the parties.

Generally, plan support agreements frame the material terms of the proposed restructuring, and by executing a plan support agreement, a creditor agrees to vote for and support the terms of a restructuring plan that will be circulated to all creditors in the future. Creditors are often induced to sign on to a PSA in return for an enhanced recovery under the proposed plan of reorganization.

Plan Support agreements may help reduce the cost, length, and negative publicity associated with a bankruptcy filing by assuring the market, including prospective lenders or investors, that the debtor will exit bankruptcy without causing too much disruption to employees, customers or partners of the debtor. At the same time, if a debtor enters into a plan support agreement with less than all of its significant stakeholders, it could be a recipe for litigation.

Following are the key terms of a plan support agreement;

Following guidelines need to be followed for drafting a restructuring plan support agreement:

Following are the benefits of a plan support agreement:

Plan support agreements, however, enhance the powers of senior creditors. Senior creditors have learned to exploit restructuring support agreements to gain an additional level of control over the debtor. To this effect, the debtor promises not to bring any avoidance actions against parties to the agreement and to oppose the appointment of a trustee or an examiner with expanded powers. The enhanced ability to form coalitions may offset to some extent the ability of individual creditor groups to extract value.

Further, there exist a lot of issues which need to be addressed such as banks’ inability to address asset quality issues owing to lack of infrastructure, misuse of Corporate Debt Recovery (CDR) provisions by companies by offering preference shares with limited voting rights to banks in the debt-equity swap mechanism, lack of clarity as to the opinion of the smaller banks in the consortium of banks approving a CDR package, among other issues.

Plan Support Agreements have become a mainstay restructuring process, and it is therefore vital for distressed investors and other creditors to have a clear understanding of the legal terms of a contemplated Plan support agreement. Distressed investors and other creditors will be well advised to become more familiar with how certain provisions in a Plan support agreement can be addressed, and how such provisions have been addressed by debtors and creditors in other bankruptcy proceedings. 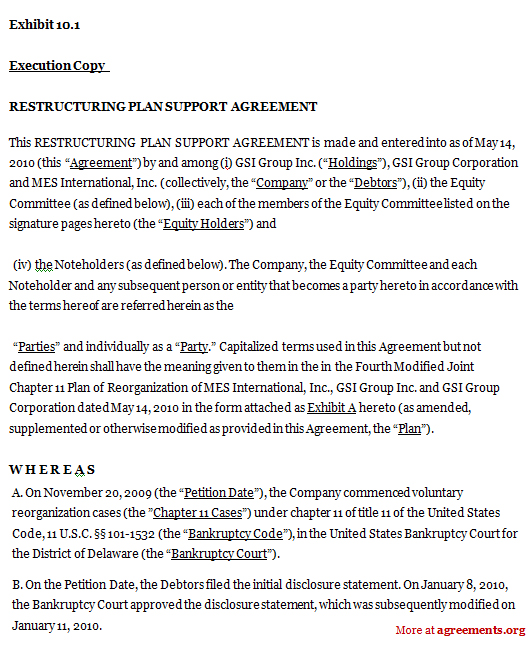