What Is a Restricted Stock Agreement?

As commonly understood, an agreement that places certain restrictions on the stockholder’s rights with respect to the shares being issued is referred to as an RSA. The need for a restricted stock agreement emerges during issuing restricted shares to new owners of a start-up. Most of the new companies do not have enough cash and hence enter into financial arrangements through stocks issued over a certain period of time.

These transfer restrictions come into play through two types of agreements: one among the founders of a start-up, and the other on the insistence of the investors. While the former ensures contribution by each founder, the latter sets to appease the investors. The legal purpose of these different aspects would be understood in the coming sections.

Who Are the Parties to Such an Agreement?

Founders of a company enter into an RSA to restrict selling, transferring shares, etc., and give a series of rights in favor of the Company to buy back shares, exercise a right of first refusal, and others. Generally, Investors want to see the founders’ shares being taken in a manner that preserves the company’s ability to take firm action in the future.

What Is the Purpose of a Restricted Stock Agreement?

What Are the Contents of a Restricted Stock Agreement?

How to Draft a Restricted Stock Agreement?

What points should be considered while drafting the same?

What Are the Benefits and Drawbacks of a Restricted Stock  Agreement?

Generally, any violation of a Restricted Stock Agreement brings about forfeiture of shares by the company. Further, the entire dealing wherein the terms of the RSA are violated, are deemed null and void in law. Hence, it is much to the company’s discretion at the time of entering into an RSA, to clarify the repercussions of going against the arrangement.

With an exponential increase in the number of start-ups and entrepreneurs, there is always a necessity to enter into financial agreements. These cannot totally be based on cash. Stocks as equity have emerged as an important, and quintessential part of the economy. New companies generally. It is of utmost necessity, today, that firms and entrepreneurs familiarize themselves with the relevant provisions of law applicable in case of entering into an RSA, and what are the ideal ways in which the same might be formed.

A sample of the Restricted stock agreement can be downloaded from below. 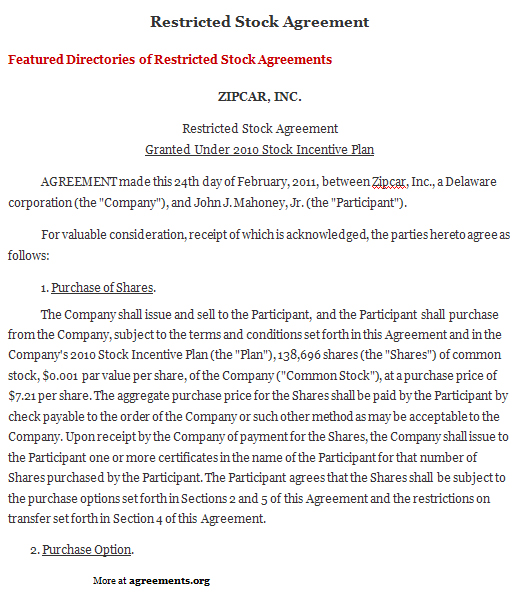