A Repurchase agreement, also known as a ‘Repo’, is a contract to finance ownership of bonds and other debt securities. In a standard repurchase agreement, the dealer borrows a certain amount which is lesser than the market value of the security offered so that the loan from the customer is over-collateralized.

Purpose of a Repurchase Agreement?

Repo contracts are an example of how to regulate the money supply and how reserves are held by banks as against individuals who usually use these agreements to finance the purchase of debt securities. For the buyer, such contracts are an opportunity to invest cash for a customized period of time being a short-term investment makes it all the safer and more preferred. A classic repurchase agreement example would be borrowing short-term loans and issuing securities in lieu of the same.

Inclusions in a Repurchase Agreement?

Drafting of a Repurchase Agreement?

The first step to drafting the agreement is the declaration of the time period and start date of the transaction followed by the names of the party to the contract. This is then accompanied by the background of the transaction which covers the value of loan and the value of the collateral that is being provided for it, the consideration for this is also enumerated thereafter. The purchase price and the consideration are then written.

There is a clause pertaining to the repo rate and the tenor of the contract. This is followed by any all representations made by the seller and the corporate entity along with any and all warranties held by each. The closing date is then defined on which the repurchase would be affected. There is a clause containing the voting rights and dividend distribution.

Types of a Repurchase Agreement?

There are three main types of repo:

Benefits of a Repurchase Agreement?

Benefits of a repo:

Cons of a Repurchase Agreement?

The main challenge of this type of an agreement is matching the two parties. Since the sum involved is of a large quantum, the investor engaged on the reverse end is mostly a group of investors, like a private equity group instead of an individual investor.

For the party repurchasing securities, there is the chance it will have to rebuy the shares at a higher price than it sold them for or that the party will not come up with the anticipated cash to be able to rebuy the securities. On the other hand, if the prices of the collateral plummet, it may cause loss of profits to those who purchase.

Repurchase agreements prove to be highly efficient to both parties. Given their secured nature, they are widely used in the market. Typically, disputes arising out of such contracts are resolved through arbitration. 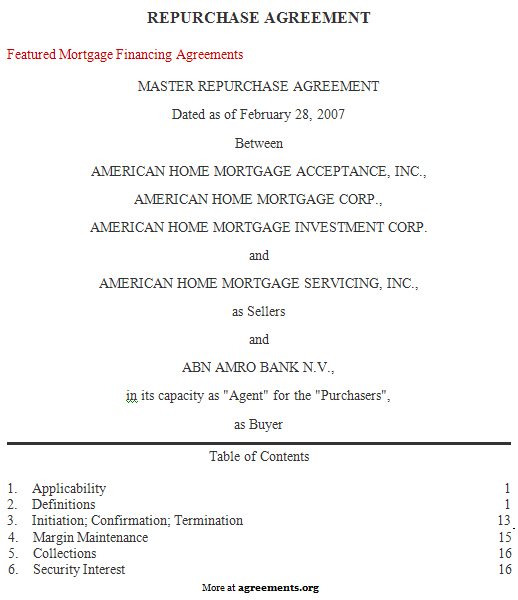