Recapitalization is a process used by a company to change its financial structure. Every company has some capital. It can be in the form of debt (bonds, debentures, etc.) or equity (common stock, preferred stock). When a company faces financial trouble or wants to stabilize its capital structure, it opts for recapitalization. This means that it changes the portion of its debt or equity capital by exchanging one form of capital for another (debt for equity or vice versa). This changes its capital structure. It is brought about by a recapitalization agreement.

This agreement highlights the terms and conditions of recapitalization between the company and the stockholders. It states the capital held by the stockholders, how and when it will be recapitalized, and the obligations of the parties.

Purpose of a Recapitalization Agreement

It is an important instrument for a company to manage its capital structure. When its stock prices fall, the company can use this agreement to issue debt and buy back some of its common stock. This will prevent the prices from falling further. It has to account for this repurchase of its common stock (called recapitalization accounting). The stock so purchased can either be retired or reissued later.

It is also used when the company wants to reduce its debt. This can be illustrated with the following recapitalization example- Suppose Company A has 60% of its capital as debt. Since debt comes with strict obligations to repay the interest and the amount, the company can recapitalize its capital structure and bring the debt down to 50%. This will reduce its financial burden. On the other hand, a company may want to reduce its equity so that it is not targeted by other companies for acquisition.

How to Draft a Recapitalization Agreement?

Since it is a complex legal document, it is advisable to have lawyers draft it for the company. The following points should be kept in mind during the drafting stage:

Benefits and Drawbacks of a Recapitalization Agreement

Normally, the agreement contains a provision that states what relief a party can seek if any term is violated. It can seek relief from the local court of the state whose law governs the agreement. Relief can vary from injunction to specific performance, or any other relief agreed between the parties. Besides, violation of recapitalization would mean that the company chose to recapitalize in a way that the shareholders did not agree for. That means that the original shareholder powers will remain intact including their claims and liens which they might move the court to repossess

This agreement also helps prevent bankruptcy. If the agreement satisfies all the stakeholders, the company can continue to function and avoid going bankrupt. Thus, the terms should be vitally be included in the agreement while being drafted to ensure security. 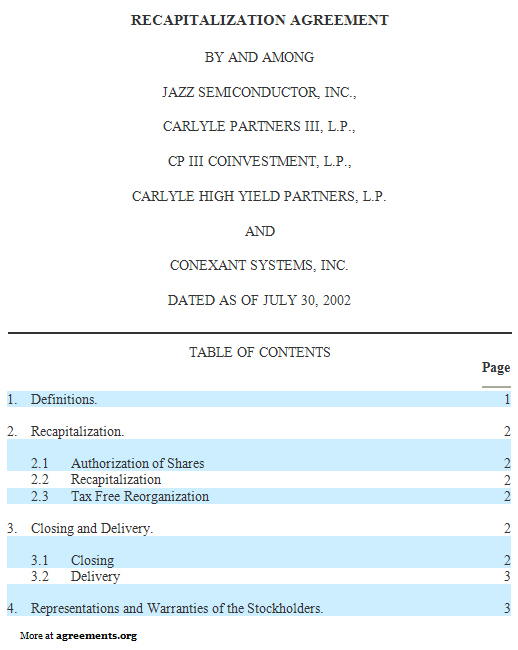