A promissory note is a legal instrument that documents a loan transaction between two parties. A promissory note is a ‘promise to pay.’ The person who is the borrower signs the note as evidence that he has borrowed the money, and this note is thereafter kept with the person who has lent the money as evidence of the fact that he has given the loan.

The promissory note with collateral agreement must contain certain legal conditions such as an offer and an acceptance of that offer.

If debtor defaults on a promissory note by failing to make a payment on time, the holder of the promissory note i.e., the lender may give notice of default and if the past due payment is not paid, file an action to collect the entire balance of the note plus any interest due.

When Do You Need a Promissory Note with Collateral Agreement?

A promissory note is needed when a person lends money to another person and wants to formally write down the terms and conditions under which the loan has been given. This note helps to reduce the degree of risk involved in giving a loan. It protects the lender from default and the borrower from unscrupulous lending practices.

A promissory note is generally used when a loan is given to family or friends, but it can also be used in business transactions.

Inclusions in a Promissory Note with Collateral Agreement

The promissory note with collateral agreement should include details of the parties involved, such as the debtor or maker of the note, who receives the money and commits to paying it back, and the lender or creditor who gives the loan.

The note should include the term of the loan, and the schedule for the repayment of such loan, the rate of interest that will be applicable also must be mentioned. It will also include provisions as to the consequences if the loan is not paid. A promissory can be one that is payable on demand by the lender or one that can be paid over a period of time. This should be clearly mentioned in the note.

The promissory note comes into effect the day it is signed by the concerned parties. When a lender loans money to the debtor, he or she requires a written commitment about when the money will be returned. The loaned money can be returned in installments, and the installments are mentioned in the note.

How to Draft a Promissory Note with Collateral Agreement?

The following are the steps for drafting a promissory note with collateral agreement:

Benefits of a Promissory Note with Collateral Agreement

The following are the types of promissory notes:

Key Terms in a Promissory Note with Collateral Agreement

The following are the key terms of a promissory note with collateral agreement:

In the event when a borrower fails to repay the loan amount, the lender always has the rights on the collateral assignment with which they can get their due amount in cash.

If there is a violation of a promissory note, there are remedies available that can help the opposite party enforce such a promissory note. The asset or property that has been provided as collateral for the promissory note can be repossessed in case the borrower breaches the conditions of the note.

Sample of a Promissory Note with Collateral Agreement 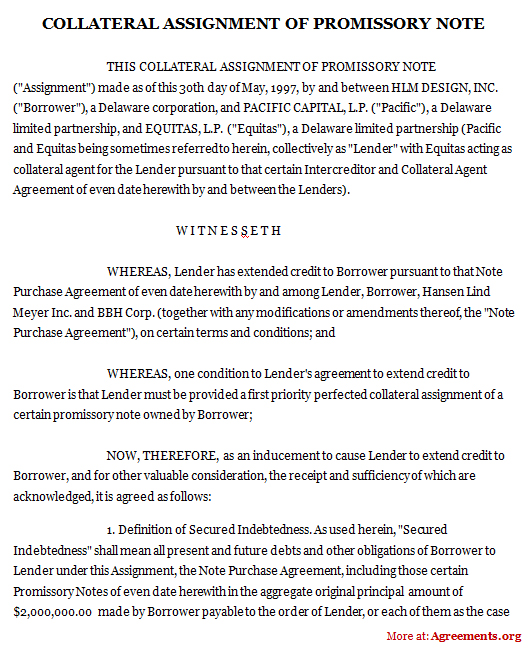