What is a pooling agreement? A Pooling Agreement is an agreement through which shareholders of a company pool their voting rights and assign those rights to a trustee. Thereafter, the trustee exercises the voting rights on behalf of the shareholders.

Such agreements are also called voting agreements or shareholder-control agreements, vote pooling agreement since they are used to control the affairs of the company. With this strategy, a group of shareholders agrees to vote the same way for directors ahead of time, making it more difficult to influence the vote. It involves combining the rights attached to shares and using them together as a unit so as to maintain a majority in the voting process. The agreement can be among any number of shareholders.

When Do You Need a Pooling Agreement

This purpose of this agreement is to lay down the terms and conditions of the transfer of their voting rights. By combining their voting powers and transferring those voting rights to a trustee, it increases trustee’s influence on different corporate decisions and strategies.

The agreement does not change the ownership of the stock which remains with the shareholder.

Inclusions in a Pooling Agreement

This agreement must clearly state the names of the parties between whom the agreement is entered into. This will include shareholders who are transferring the voting rights and the trustee to whom the rights are being transferred.

Every pooling agreement must mention the duration for which it will be valid after which the agreement will expire and the voting rights will go back to the shareholders. It must also provide the manner in which the trustee is to be appointed.

How to Draft a Pooling Agreement

The following are the steps to be followed while drafting a pooling agreement:

Benefits of a Pooling Agreement

Key Clauses in a Pooling Agreement

The following are the key terms of a pooling agreement:

Alternatively, any other form of dispute resolution such as mediation or negotiation may also be mentioned in the agreement.

Sample of a Pooling Agreement

If you require a template of a pooling agreement, you can download a sample here. 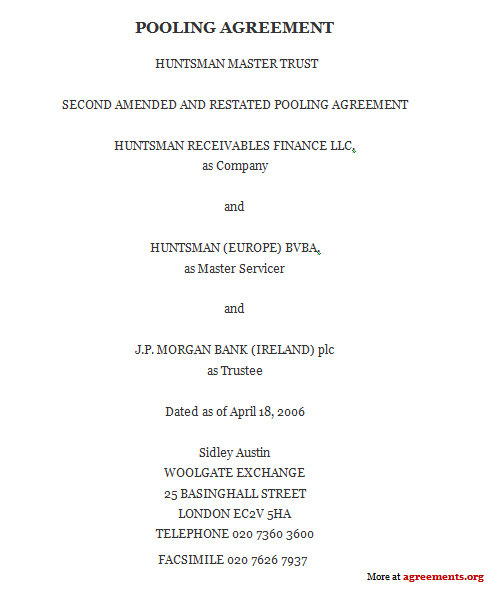