The most important details that are mentioned in this Agreement are the name of the individual or company who made the original invention or discovery, the specifications of the invention or discovery that has been made, the name of the company, organization or individual to whom the patent will be assigned and also the date on which it will be assigned.

When Do You Need a Patent Assignment Agreement?

The most common application of a Patent Assignment Contract can be found when a company or an individual has made a new discovery or has invented a new product and therefore wants to make sure that they have the sole legal right over its use. With a patent in place, they can easily claim the sole rights of the invention and also take executive decisions on its use, sale, transfer, and anything in between.

The most important aspect of this contract is the fact that the patent of a specific invention can be assigned to only one party at any specific point in time.

Inclusions in the Patent Assignment Agreement

Parties Involved: In the creation of this Agreement, there are usually two parties involved, the first being the US Patent and Trademark Office and the second being the Company or Organization to whom the patent is being assigned.

Where does it Apply: This agreement is legally binding within the boundaries of the state or city it was originally drawn at.

How to Draft a Patent Assignment Agreement?

Follow the mentioned steps in order to draw this agreement.

Organize a meeting between both parties involved and discuss the terms and conditions of the patent agreement. Discuss the dates from when the patent will come into effect, among other important details.
Once both the parties have agreed to the terms and conditions, reach out to a legal team and ask them to draft a Patent Assignment Agreement on your organization’s behalf.
Cross verify and check the details with both the parties and file the contract in the local court of law as advised by your legal team.

Benefits of a Patent Assignment Agreement

The benefits of having this agreement are outlined below.

Cons of not having a Patent Assignment Agreement

In the absence of this agreement, both parties don’t have legal proof of a transaction ever taking place between both the entities and therefore stand to lose if the matter is ever taken to court. 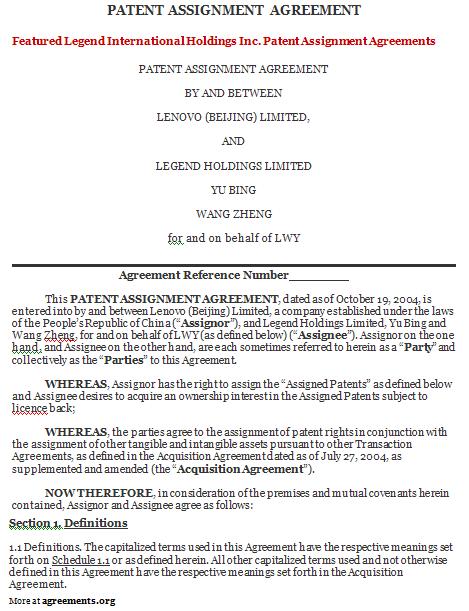