A partnership restructuring agreement is an agreement which enables the parties to modify or alter their existing partnership contract. Typically, terms such as profit-sharing, capital contribution, obligations, adding of partners, etc. are subject to such an agreement. Negotiations form the basis of such a deal but are considered better than entering into an entirely new contract.

What is a Partnership Restructuring Agreement?

Before setting out to draft such an agreement, one should have the following information at hand: names of the parties (existing and new), the modified terms, any changed timeline or duration, the date from which such changes would be implemented. It is essential to reference the original agreement in this contract. Negotiations typically occur for such agreements; however, it is better than re-negotiating all the terms and hence, is preferred over signing an entirely new contract.

Purpose of a Partnership Restructuring Agreement

The purpose behind such an agreement is to restructure partnership terms by way of a written and properly executed agreement. It helps to easily modify the terms and conditions provided for in the original agreement. It also helps in adding new partners.

Inclusion in a Partnership Restructuring Agreement

The key inclusions in a restructuring agreement are: partnership terms such as profit sharing, duration, change in capital contributed, etc. Apart from the above, the name of the parties, effective date, remedies, notices, dispute resolution, waiver, severability, and other such standard clauses should also be present. Statements making references to the original agreement, statements confirming that other terms have remained unchanged, should also be included.

The following key business partnership terms should be added in a restructuring agreement:

How to Draft the Partnership Restructuring Agreement?

The following guidelines need to be followed in order to draft a restructuring agreement effectively:

Benefits of a Partnership Restructuring Agreement

A restructuring agreement has the following benefits: 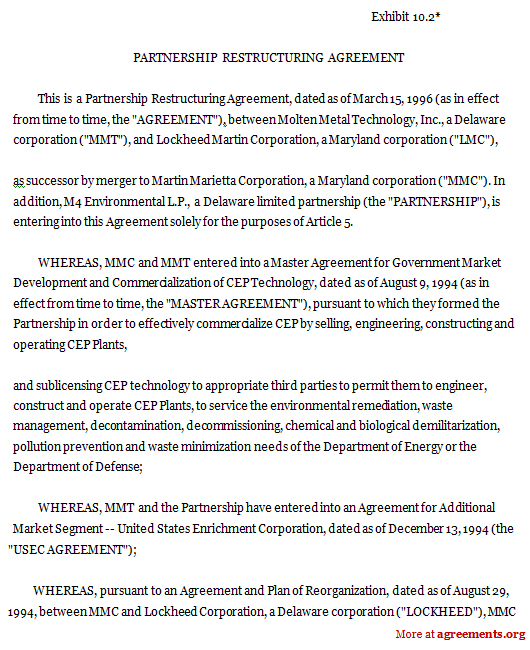