A Non Compete Agreement is a vital tool to protect the interests of an employer. Now, what exactly is a Non Compete Agreement? According to the Contract Law, a non-compete agreement is under which ‘one party (usually an employee) agrees not to enter into or start a similar profession in competition against another party (usually the employer).’ It is also known as Non Compete Clause (NCC), Covenant not to Compete (CNC), and Restrictive Covenant.

When Do You Need a Non Compete Agreement?

It is not sufficient enough to know what is a Non compete agreement. You must go through the template of the concerned state before drafting or entering this agreement.

How to Draft the Non Compete Agreement?

This agreement is restrictive, and the legal system does not favor it. So, while drafting an agreement, it should be as unrestricted as possible. You could follow these steps

The key terms of this agreement should include the duration of the non-compete clause, geographical restrictions, compensation, and the type of market or business he has been restricted.

If prepared and followed judiciously, this agreement can turn out to be beneficial to both parties.

You should have a clear understanding of precisely what are the consequences of violating a non-compete clause. In case of violation of this agreement, the court takes the decision. If the court finds the employee guilty, then he has to either give financial compensation or is debarred from work for the duration specified in the clause.

There are four types of non-compete agreements. A non-compete one is where the employee is restricted from working in a similar company. Non-solicitation of customers, non-solicitation of employees, and non-disclosure deals with restrictions to the company’s clients, other employees, and information, respectively. You could go through a sample agreement since different states have a different set of rules included in this agreement. For example, a non-compete California is entirely different from that of Pennsylvania. However, all these agreements should aim for facilitating and not restricting trade.

Non compete agreement template can be downloaded from below. 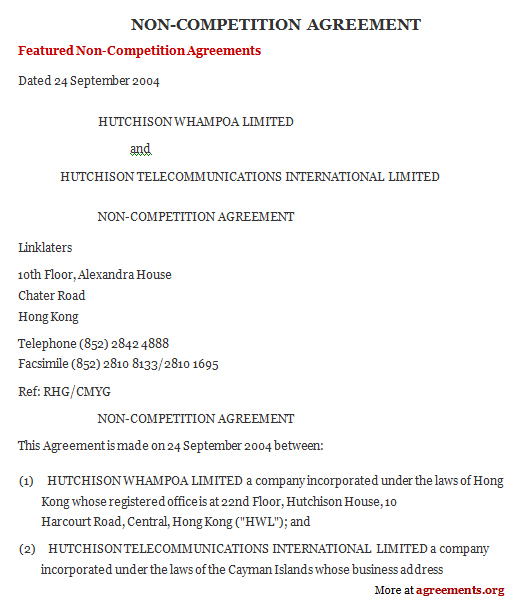