What is a Nominee Agreement? A Nominee Agreement is an agreement through which the owner of a particular property transfers the rights in the property (such as mortgages, licenses, easements, charges etc.) to a nominee selected by him. The property is registered in the name of the nominee for the duration of the agreement so as to enable him to perform his functions under the contract. The nominee has the power to execute transactions on behalf of the owner but he can only perform the acts authorized by the owner and cannot take any decisions on his own.

When Do You Need a Nominee Agreement

This agreement is needed when an owner of a property wants to transfer certain rights in a property to a nominee so as to enable him to perform certain duties on behalf of the owner.

This purpose of this agreement is to lay down the terms and conditions of the agreement and the rights of the nominee. In most cases the nominee can only execute certain documents according to the power given to him under the agreement. There is no liability incurred by the nominee and he is not responsible for performing contracts between the owner and a third party.

The existence of this agreement does not change the manner of inheritance of the property. In case of the death of the owner, the nominee becomes a trustee of the property and holds it on behalf of the legal heirs.

Inclusions in a Nominee Agreement

This agreement must clearly state the names of the parties between whom the agreement is entered into. This will include the owner who is transferring the rights in a particular property and the nominee who is accepting such rights.

How to Draft a Nominee Agreement

The following are the steps to be followed while drafting a sample nominee agreement real estate:

Benefits of a Nominee Agreement

Key Clauses in a Nominee Agreement

The following are the key terms of this agreement:

What Happens When You Violate a Nominee Agreement

Alternatively, any other form of dispute resolution such as mediation or negotiation may also be mentioned in the agreement.

Sample of a Nominee Agreement

A nominee agreement template can be downloaded from below. 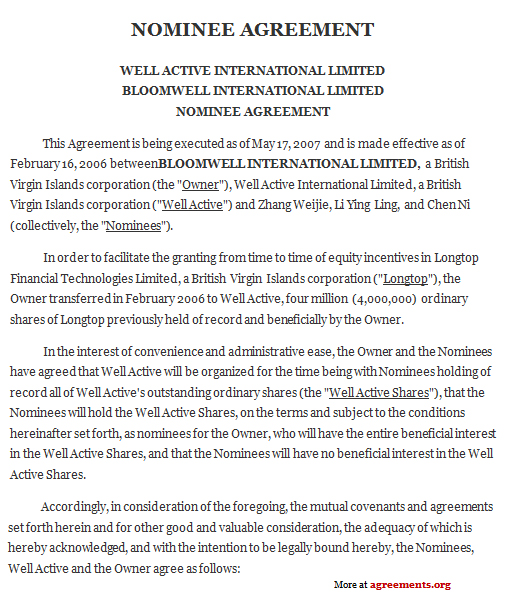