A Missouri lease agreement is a binding contract between a landlord and a tenant to lease out a property situated in the state of Missouri. It can be for commercial or residential use. It establishes the conditions that will govern the use of the property. The tenant is required to pay a certain amount of rent every month during the lease. It usually extends to one year and can be longer depending on the requirement of the tenant.

Laws in the state of Missouri may differ from other states in the United States of America. Hence it is important to ensure that a Missouri lease agreement is in compliance with the laws of Missouri.

Purpose of a Missouri Lease Agreement

A Missouri lease agreement lays down the duties of the tenant and the landlord during the period of the lease. It allows them to have a clear understanding of what is required by either party. This helps in reducing ambiguity and addresses any concerns that either party may have. In case of a dispute, the agreement can be referred to resolve the issue. The courts will also look into the terms of the agreement when adjudicating a dispute concerning the lease.

Having a written lease agreement gives a comprehensive account of the terms agreed to by both parties. In Missouri, if the agreement is not in writing and signed by the parties, it is assumed to be a month-to-month lease agreement. Therefore, it is important to have a written agreement to avoid ambiguity.

Irrespective of the type of lease, there are certain important terms that must be included in a lease agreement in Missouri. These are:

How to Draft the Missouri Lease Agreement?

The following are the different kinds of lease agreements in Missouri-

A template of a Missouri lease agreement can be downloaded from below. 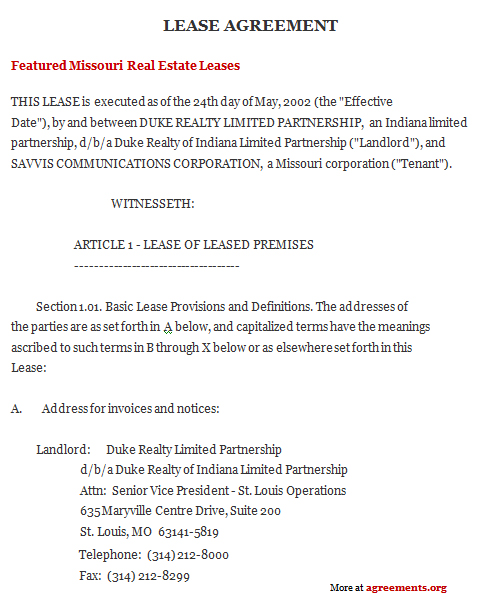