When two businesses decide to come together to form a single entity in the interest of enjoying a mutually beneficial position in the market, they are said to engage in a merge. A merger agreement is a document that governs such mergers and is legally binding on the contracting parties. By such an agreement, one business is dissolved (the dissolving entity) into the surviving entity and there is a provision to give the final entity a new name.

When Do You Need a Merger Agreement?

The purpose of the agreement is to:

This will be the primary document that will be referred to, in the event of a legal dispute. It is essential that you have the agreement framed in consultation with the other party and their representatives, so as to avoid miscommunication.

The most important aspects of a merger agreement include the names of the dissolving entity, surviving entity and the final entity, the date on which the agreement comes into effect, the jurisdiction that governs the merger, the valuation of assets, the distribution of equity in the final entity arising out of the merger and clauses that define the scope of each party’s liability and any limitations thereto.

Other clauses may identify representatives of each party and their legal relationships with the parties, the method of conversion of stock, warranties, and references to other annexes of the document. These agreements are often very complex and it is of utmost importance to ensure that there are no spelling or syntax errors when drafting the document because such errors could have legal implications to the extent where the entire document could be voided because of a single error in syntax.

How to Draft Merger Agreement?

Procedure to draft a merger agreement: 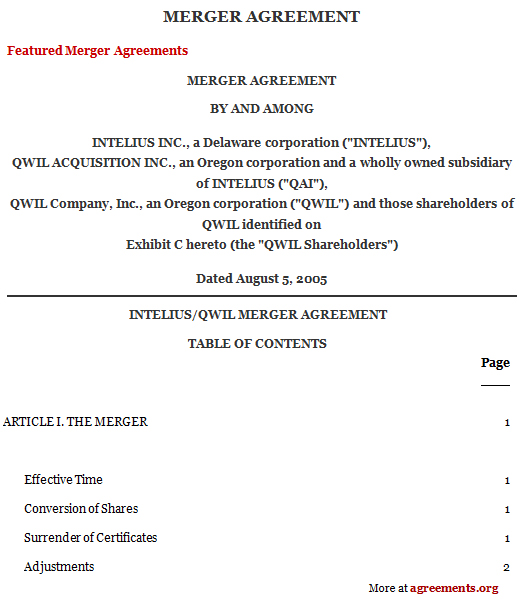