A Manufacturing Contract is a legal contract that is created between two organizations when they have mutually discussed and decided to enter into an agreement to manufacture and create a new product. In this type of legal documents, the first party is usually the company or organization who has the idea of manufacturing a new product, and the second party is the organization or agency who has been chosen as the manufacturing partner for the said organization. This contract outlines the exact specifications and dynamics of the product that needs to be manufactured, along with other finer details of the agreement.

When Do You Need a Manufacturing Contract?

The most common use of a Manufacturing Contract can be found when an organization has come to the decision of creating a new product for the market and has thus partnered up with another organization or manufacturer in order to manufacture the said product. This legal document acts a bond of trust between both the organizations and outlines the exact specifications of the product to be manufactured.

One of the most important things to note about this contract is the fact that it clearly states that the product which will be manufactured will have the brand of the parent organization and not the manufacturing partner.

How to Draft a Manufacturing Contract?

Follow the mentioned below steps in order to draw Manufacturing Contract.

Benefits of a Manufacturing Contract

The benefits of having a Manufacturing Contract are outlined as below.

Cons of Not Having a Manufacturing Contract 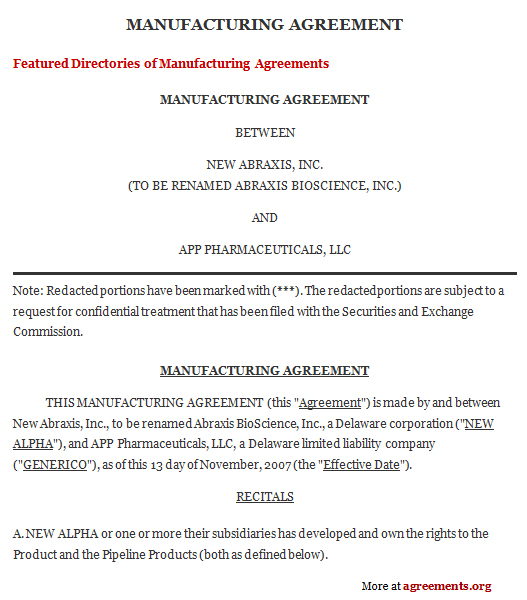