A Brief Introduction About the Maine Lease Agreement

A Maine Lease Agreement is a legal document that is created between a property owner and a tenant, both of whom are located in the state of Maine, which falls under the jurisdiction of the United States of America. The Maine Lease Agreement gets its name in accordance to the fact, that the contents of this lease agreement match with the rules, regulations along with terms and conditions as set forth by the state legislature at Maine while being in accordance with those set by the Federal government.

In the creation of a Maine Lease Agreement, there are usually two parties involved. The first party being the landowner or the landlord who is the legal owner of the property or real estate located within the boundaries of Maine. The second party, in this case, is the tenant, who is eager to rent out the property in context. In legal terminology, the first party is referred to as the Landowner, the second party as the Tenant, and the legal document simply as the Lease Agreement.

Purpose of the Maine Lease Agreement – Why Do You Need It

The main purpose of this agreement is to establish a legal understanding between both parties and to make sure that the interests of the individual parties along with the collective are protected at all points in time.

Parties Involved: In this legal agreement, there are usually two parties involved; the first being the landowner or landlord who owns a property or real estate in the state of Maine, and the second party being the tenant who is leasing out the property or real estate from the landlord for a mutually decided period of time. In legal terminology, the first party is referred to as the Landlord, and the second party is referred to as the Tenant.

Where does it Apply: This agreement is legally applicable within the boundaries of the state, city, or county where it was originally drawn at.

How to Draft the Maine Lease Agreement

A Maine Lease Agreement can be drafted by simply following the steps mentioned below.

Organize a meeting both the parties and discuss upon the terms and conditions of the agreement, such as the tenure for which the said property or real estate will be leased out, the amount of funds that will be paid in exchange for the property being leased, the terms and conditions, along with rules and regulations that need to be followed by both the parties, among other finer details.

Once both the parties have mutually agreed to all the terms and conditions, reach out to a lawyer and ask him to draw up a Maine Lease Agreement according to the specifications discussed.

Get both the parties to sign the contract and get it registered in a house of law as suggested by your lawyers.

While negotiating the formation of a Maine Lease Agreement, it must be taken care that the individual interests of both parties must be addressed along with the collective cause.

The most significant benefits of having a Maine Lease Agreement are as follows.

In the absence of a Maine Lease Agreement, neither of the parties have legal proof of an understanding taking place between two entities, and thus if the matter is ever brought to court, both parties stand to lose.

What Happens In Case of Violation

In the case of violation of a Maine Lease Agreement, certain remedies come into effect, and in a few cases the contract is dissolved, and a new set of terms and conditions are agreed upon.

While it might be popular opinion to believe that the landowner or landlord has more power than the tenant, this agreement is created in such a way so that both can be put on an equal pedestal. Neither of the parties has more power and influence over the other unless and until certain rules and regulations have been broken, a default in payment has happened, or there is any other noted case of a violation.

While cases of a violation in a Maine Lease Agreement can be settled in court, it is always advisable that the same be resolved with talks between the two parties, because as mentioned in an earlier paragraph, the foundation of this agreement lies in good faith. 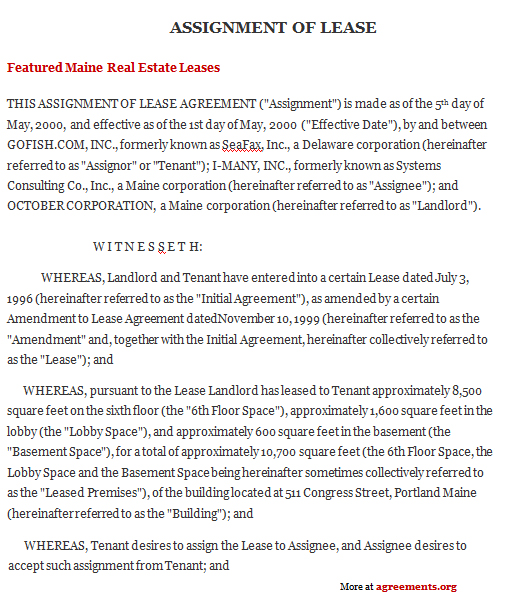