A Louisiana Lease Agreement is a legal document that is created between a landlord and a tenant when a property or real estate is being leased out in the state of Louisiana, United States of America. Every state in the United States has some unique laws and regulations in place that need to be fulfilled every time a legal document is created and thus a Louisiana Lease Agreement is created such that the unique rules and regulations of the state of Louisiana are met at all times.

This contract is a legal document like any other lease agreement that is created when a property owned by a landlord in the state of Louisiana is being leased out to a tenant who may or may not be a resident of the same state. This agreement acts a bond of trust between both the stakeholders and is a legal proof that a transaction took place between the two. It outlines all the duties, responsibilities and limitations of both parties and makes sure that they are aware of the same at all points in time.

When Do You Need a Louisiana Lease Agreement?

The most common application of this legal document can be found when a property or real estate in the state of Louisiana is being leased out to a tenant and thus a contract needs to be established between the two.

The most important aspect to note about this contract is the fact that it is made in such a way that the rules and regulations of the state of Louisiana are always followed.

Parties Involved: In the creation of this contract there are usually two parties involved; the first being the landlord who owns the property or real estate located in the state of Louisiana and the second is the tenant to which the property is being leased out to.

Effective Dates: This section of the agreement states the date on which the same will come into effect and until when the contract will hold legally binding.

Where does it Apply: This contract is legally binding within the boundaries of the state of Louisiana, where it was originally drawn at.

How to Draft a Louisiana Lease Agreement?

Follow the mentioned below steps in order to draw Louisiana Lease Agreement.

Benefits of a Louisiana Lease Agreement

The benefits of having a Louisiana Lease Agreement are outlined as below.

Cons of not having a Louisiana Lease Agreement

In the absence of a Louisiana Lease Agreement, both parties don’t have a legal proof of a transaction ever taking place between both the entities and therefore stand to lose if the matter is ever taken to court.

Notices: Both the stakeholders in the contract need to issue certain notices to each other and this section of the contract, outlines the details of the same.

Disclaimers: The parties involved in the creation of the contract need to provide certain disclaimers to each other and this section contains details of the same.

Remedies: In the case of a lapse in agreed terms and conditions or a default in payment, certain remedies immediately come into effect, the details of which are enclosed in this section of the contract.

Obligations: Both the parties have certain obligations to each other, during, and after the creation of the contract, the details of which are mentioned here. 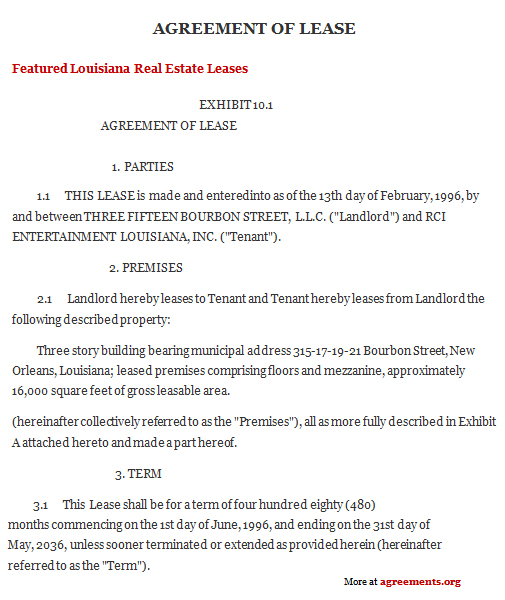