A Brief Introduction About the Lock Up Agreement

What is lock up agreement? An agreement between a company or its underwriters and the stockholders at the time of an Initial Public Offer (IPO) or Capital Increase is a Lock-Up Agreement. The stockholders are generally the key insiders of the company – the executives, venture capitalists, the employees, and their friends and family. The agreement prevents these insiders from selling their shares for a specified amount of time, usually 180 days. They may additionally prevent the number of shares that can be sold for the period. This helps maintain the stock prices in the market to a large extent at the time of the public offer.

Who Takes the Lock Up Agreement – People Involved

As discussed above, the agreement is between the company or its underwriters and its stockholders. It is usually executed at the time of an initial public offer but can also be affected during other capital increases. Certain blue sky laws require the execution of this agreement to protect the investors of the company from security frauds.

Certain laws require the disclosure of any such lock ups in public registration documents including the prospectus for inviting new stockholders. This allows the interested parties to make well-informed decisions on their prospective investments.

Purpose of a Lock Up Agreement

The primary purpose of a lock up agreement is to avoid volatile fluctuations in the market prices of the company’s stocks for a specified time after the public offer, whether initial or secondary. It is to ensure a stable trading environment.

It is intended to protect the investors from security frauds wherein the company’s insiders may sell their stocks at overvalued prices in the market, ultimately leading to a crash in the company’s market price.

The typical period for a lock-up is 180 days, which is believed to be sufficient for the market to evaluate the value of the stocks on its own terms. It also helps maintain the market confidence in the stocks during the offering.

The prime purpose of the agreement is to ensure smooth trading at the time of a public offering. As such, the agreement must include the following:

It is important to note that the lock up agreements are generally signed in conjuncture with the underwriters’ agreement and the terms are negotiated accordingly.

Drafting a Lock Up Agreement

Points to Consider While Preparing the Agreement

The exceptions or carve-outs form the most important part of the agreement. When drafting a lock up agreement, you need to keep the following in mind:

The various types of lock up arrangements :

Further to the above exceptions, stakeholders require the following:

1) Transfer of shares in the case of financial or property planning – as a gift to charity, transfer to their legal heir, their trust fund, to a company lock-up party or as a relinquishment to the company
2) Staggered discharges from the lock-up

Since the main purpose of the agreement is to prevent drastic shifts in market prices of stocks for public offerings and not to impose restrictions on the directors or insiders of the company, it is important that lock up exceptions are accommodated. The underwriters usually allow for transfers to shares to them and negotiate equity compensations with the stockholders.

Benefits & Drawbacks of the Lock Up Agreement

We have discussed numerous benefits of the agreement. It can be observed in the following ways:

Despite its many benefits, there are some negatives to the agreement. We have listed some of them below:

What Happens in Case of Violation

In the case of a conflict, the underwriter’s generally include a stop-transfer clause. This allows them to appoint a registrar to examine the transfer and decline any that would lead to the breach of the agreement.

In case of any further violation, the aggrieved party can approach the court seeking a settlement.

The agreement seeks to keep a stable market price of the stock and to protect the investors by preventing any opportunistic behaviors by the insiders at the time of a public offer. At the same time, the agreement does not intend to force any strict restrictions on the insiders, affecting the general business of the company.

The same should always be kept in mind when negotiating and drafting the agreement. 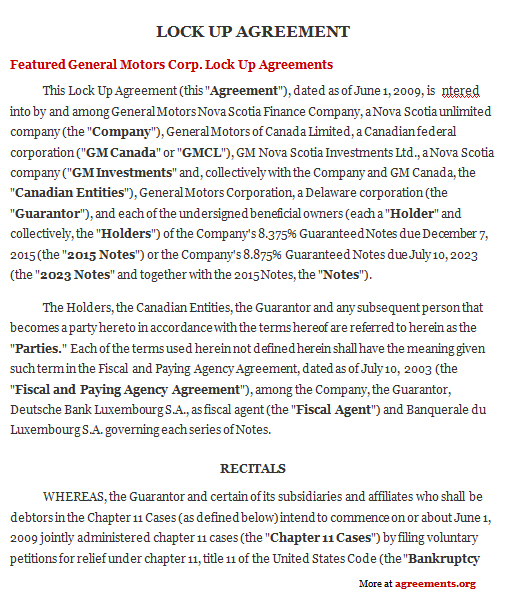