A Brief Introduction About the LLC Operating Agreement

The presence of this agreement is mostly felt when there is a presence of more than one partner in the formation of an LLC corporation. This agreement intends to make sure that all the credentials of the LLC firm are documented at all times. In layman terminology, it helps one to govern and protect the individual as well as collective interest when forming an LLC or a Limited Liability Organization.

In the formation of an agreement, there are usually two parties involved. The first part is the one who has proposed the idea of creating the business and is thus investing a certain amount of funds in order to kickstart the business. The second partner is also following the same ideology. Together they are creating an LLC organization, wherein they are equal partners and or stakeholders. In legal terminology, the first party is referred to as Partner 1 and the second partner as Partner 2.

In some cases, there are more than two partners in the same LLC organization, and in those cases, an LLC Operating Agreement is formed between all the partners. The agreement after being created is simply referred to as the agreement.

Purpose of the Agreement – Why Do You Need It

Parties Involved: In this legal agreement, there are usually two parties involved; the first being the party who has proposed the idea of business creation and has invested a certain amount of funds for the creation of the same, and the second party is the partner for the business and or organization in context. The partners in the business are referred to as Partner 1 and Partner 2 in legal terminology; the agreement is simply referred to as the agreement.

Where does it Apply: This agreement is legally applicable within the boundaries of the state, city, or county where it was originally drawn at.

How to Draft the LLC Operating Agreement?

Organize a meeting both the parties and discuss upon the terms and conditions of the agreement, such as the details of the joint venture and or project that is being undertaken, the name, specifics, and credentials of the joint venture, the individual as well as collective responsibility of both parties, the terms, and conditions, along with rules and regulations that need to be followed by both parties.

Once both parties have mutually agreed to all the terms and conditions, reach out to a lawyer and ask him to draw up an agreement according to the specifications discussed.

Get both the parties to sign the contract and get it registered in a house of law, as suggested by your lawyers.

While negotiating the formation of an LLC Operating Agreement, it must be taken care that the individual interests of both parties must be addressed along with the collective cause.

Benefits & Drawbacks of the Agreement

The most significant benefits of having an LLC Operating Agreement are as follows.

Benefits of Having an LLC Operating Agreement

Cons of Not Having an LLC Operating Agreement

In the absence of this agreement, neither of the parties have legal proof of an understanding taking place between two entities, and thus if the matter is ever brought to court, both parties stand to lose.

In the case of violation of an LLC Operating Agreement, certain remedies come into effect, and in a few cases, the contract is dissolved, and a new set of terms and conditions are agreed upon.

The fundamental purpose of creating an LLC Operating Agreement is to make sure that there is a smooth, efficient as well as hassle-free professional partnership between the stakeholders in an association. This legal document outlines the responsibilities and duties of all the parties, all the while making sure that the collective, as well as individual interests, are protected.

You can Download the Free agreement template, customize it according to your needs and Print. This is either in MS Word, Excel, or in PDF. 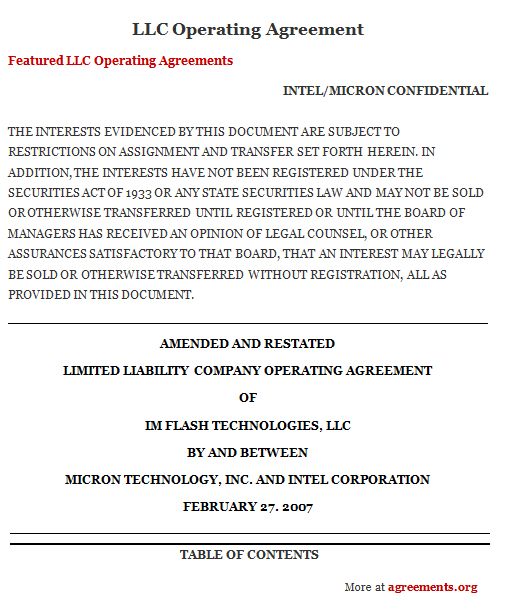