What Is a Lease Termination Agreement?

A Lease Termination Agreement or Rental Termination Agreement is executed by the Landlord and a Tenant when they put an end to a pre-signed lease term. The agreement can be signed to effectuate an early termination or end a lease that has already reached maturity. This agreement marks a definitive end of the parties’ commitments under the contract.

When Do You Need a Lease Termination Agreement?

The agreement is required when either the tenant or the landlord wants to opt-out of a Lease prematurely. The agreement acts as a safeguard against any future disputes that may arise out of the Lease termination. Generally, this agreement is made because the parties want to enter into some other lease. If that new condition is not met, then this agreement is automatically terminated.

Generally, a commercial lease or residential lease can be terminated by serving a legal notice to the other party in advance. Therefore, take the form of a simple notice or can be drafted more elaborately, depending upon the nature and complexity of the original leasing contract and the anticipated disputes in termination.

What Should Be Included in a Lease Termination Agreement?

In addition to the above and depending upon the relationship between the parties at the time of termination, a termination of lease agreement sample letter can also include confidentiality and non-disparagement provisions for added protection.

How to Draft a Lease Termination Agreement?

It is important to draft the termination of a Lease clearly. It should precisely indicate the parties’ desire to end the lease mutually or, alternatively, state the name of the party that wishes to initiate termination.

Since the end goal of the agreement is to provide a definitive resolution to all open issues, it should clearly state the roles and responsibilities of both the parties before, during, and after the lease is terminated.

Benefits of a Lease Termination Agreement

While there are no perceived cons to an agreement, any lop-sided clauses in the agreement in favour of either party may compromise the rights of the other party and may jeopardize future terms between the two. However, there is a chance that the conditions of the contract may not be honored and this agreement would be null and void giving full effect to the original lease agreement

While the terms of the agreement may vary depending upon the type of Lease and the relationship between the landlord and tenant, the key terms of the termination should cover the responsibilities and rights of both the parties upon termination

What Happens in Case of a Violation?

The lease agreement is prepared with the objective of meeting some predefined conditions. If those conditions are not met, then the agreement would be terminated automatically and the original lease document would come into force. If the breaching party does not cure the breach under the original lease either, then the parties may approach the court of law for specific performance or restitution as the case may be. In case of monetary loss, the injured party may apply for compensatory damages as well.

Lease termination can be drafted as a simple ‘Termination of Lease Agreement Letter’ or as an elaborate agreement stating the terms in further detail. A well-drafted Lease Termination Agreement helps the Landlord and Tenant release their claims in a smooth manner and avoid any future misunderstandings or disputes.

Sample for Agreement For Termination of Lease 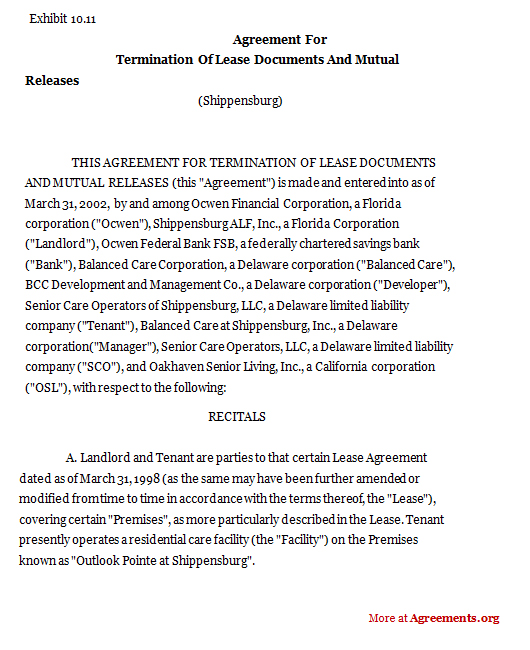