An ISDA Master Agreement is the most commonly used master contract for over the counter derivative transactions internationally. It has been published by the International Swaps and Derivatives Association. It constitutes the framework within which the documentation of over the counter derivatives may take place. It governs all the transactions that take place, in the present or in the future between the parties.

The terms need not be changed, every time a transaction is entered into.  Any customizations to suit specific transactions are typically included in schedules to the ISDA contract. An ISDA master agreement template is aimed at risk mitigation. Commercial terms which govern a particular transaction are included in the schedules appended thereto.

Purpose of an ISDA Agreement?

An ISDA Master Agreement sample, typically, serves the purpose of acting as a broad framework within which over the counter derivative transactions may function. It prevents the need for re-negotiating all the terms and leaves the parties time to concentrate only on core commercial terms and conditions. It creates standard documentation and mitigates risk. Being published by an international organization, it has the relevant authority, hence is widely accepted.

Inclusion in an ISDA Master Agreement

A typical agreement sample, contains the standard master agreement (as published by the International Swaps and Derivative Association), the schedules which will explain the commercial terms of specific transactions, the confirmation which sets out the financial and economic terms of the transaction and standard boilerplate clauses such as waiver, remedies, notices and dispute resolution.

The following terms need to be included in an ISDA Agreement(international swaps and derivatives agreement):

Drafting of an ISDA Master Agreement

The following guidelines need to be followed for effective drafting of ISDA Agreement/international swaps and derivatives agreement:

There are two versions of the ISDA Agreement. One is the 2002 ISDA master agreement and the other is the 1992 ISDA Master agreement. Both the versions split this agreement into 14 Sections which lay down the contractual relationship between the parties. It includes standard terms which detail what happens if a default occurs to one of the parties.

The following are the advantages of having an ISDA Agreement:

Cons of ISDA Agreement are:

An ISDA Agreement serves an important purpose, by acting like a concrete framework of terms and conditions within which derivative contracts can exist. Any disputes arising should preferably be settled by arbitration.

Sample ISDA master agreement pdf can be downloaded from below. 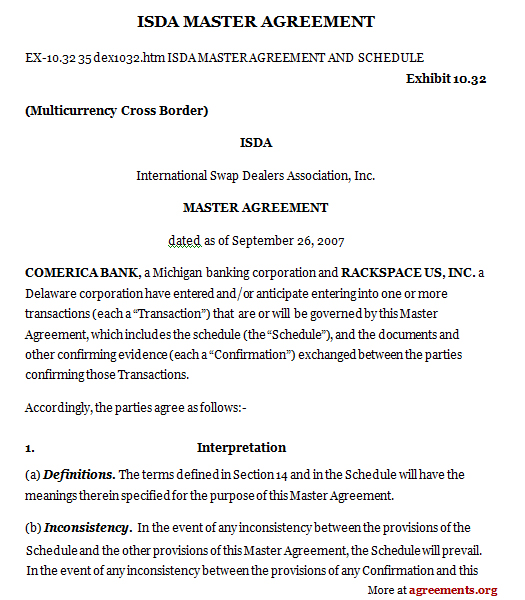