An Intercreditor Agreement is a contract signed among two or more creditors, mandating and laying down in advance how their competing interests are to be settled and how to work in consonance with respect to their mutual borrower. The reason behind such an agreement between creditors is the presence of a senior and a sub-lender. Hence, it becomes important to have the interests and claims settled in advance.

Lenders are often mandated to address the priority of their loans and the security advanced with regard to another lender to the same borrower. In some instances, a simple acknowledgement that each of them is entitled to security of a specific priority over specific assets of the borrower, to the exclusion of the other lender may be sufficient. In other cases, additional restrictions on the rights of one of the lenders may be required.

In a scenario where a senior and a sub-lender is involved, the creditors typically enter into an inter-creditor agreement in order to clearly lay down their rights.

Purpose of an InterCreditor Agreement?

An intercreditor agreement is a contract which enables creditors to set forth the various lien positions and the rights and liabilities of each creditor and its effect on the other lenders. Intercreditor contracts are often used to finance companies and by lenders to establish a priority of rights inter se.

Inclusions in an InterCreditor Agreement

Apart from complex commercial and technical clauses such as lien, priority of payouts, securities advanced etc. certain standard boilerplate clauses such as dispute resolution, choice of law, severability, entire agreement, waiver and remedies need to be mentioned in the contract.

Drafting of an InterCreditor Agreement?

An inter-creditor agreement sample can be drafted effectively by following the below given guidelines:

Types of an InterCreditor Agreement?

The four primary types of inter-creditor agreements are as follows:

Benefits of an InterCreditor Agreement?

An intercreditor agreement anticipates and attempts to remedy the problems that are presented when a borrower defaults. Simply put, the agreement states what the lien positions are and what remedies are available to subordinate lienholders in the event the borrower defaults. A major pro is that the second lienholder is offered the right to purchase at par the first lienholder’s claim, in order to secure payment on its claim. As opposed to fair market value, “at par” means face value.

An intercreditor agreement enables the creditors to lay down their rights and obligations in a defined document and prevents disputes from arising later on. However, despite having clearly written down terms and conditions, there are occasions for disputes to arise. A well-drafted arbitration clause with a neutral venue of arbitration should be included in the contract to resolve disputes. 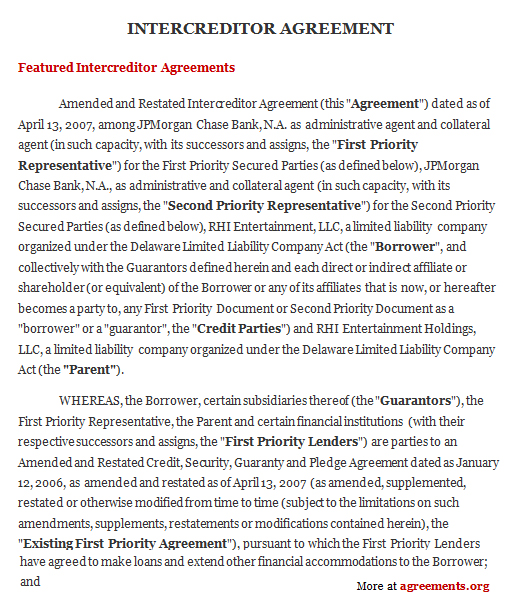