What is an indenture agreement? An Indenture Agreement is a legal document that is created between two parties when either of them is indented to provide his or her services to the other party for a stipulated period of time. One of the most interesting facts about this contract is the fact that it came into existence a long time ago when contractors used to hire laborers to work in coal, gold, and diamond mines in distant colonies and locations. Today, this legal document has a more sophisticated use and some of its many forms are the employee arrangement provided these days.

In the most basic sense this legal document outlines the responsibilities and duties of the intended worker or employee, mentions the credentials of the employer or contractor and also states the amount of time period the intended party needs to provide his or her services.

When Do You Need an Indenture Agreement?

The most common application of an Indenture Contract can be found in both long as well as short term real estate projects, where a contractor hires a certain number of individuals or worked under him or her to work on the said real estate project.

In modern times, an Indenture Contract acts as a bond of trust between the bondholder and the issuer and clearly outlines, the responsibilities, duties as well as limitations of both the parties. Bond indenture agreement states the amount of time, the bond will be valid for, along with details and ramifications in the case it ceases to exist.

How to Draft an Indenture Agreement?

Follow the mentioned below steps in order to draw Indenture Contract.

Benefits of an Indenture Agreement

The most significant benefits of having an Indenture Contract are as mentioned below.

Cons of Not Having an Indenture Contract

A sample of the indenture agreement template can be downloaded from below. 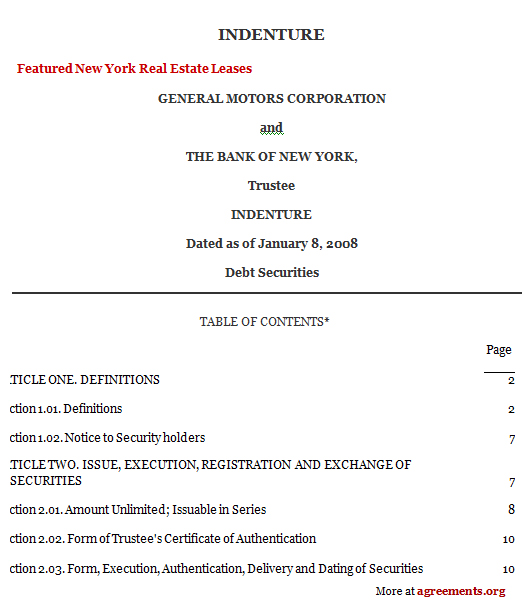