An indemnification and pledge agreement is a contract signed between two parties, generally two companies or organizations in which one party pledges its property to another in return of receiving funds. According to this agreement, the other organization is not held accountable for any financial responsibilities. A set of requirements and terms are created and both organizations must adhere to the conditions and responsibilities listed in the agreement.

The party or organization receiving funds in return of pledging its resources must ensure that funds are paid according to the agreement in a timely manner. A failure in returning the funds might result in legal action by the second party.

When Do You Need an Indemnification and Pledge Agreement?

The purpose of indemnification and pledge agreement is that it lets an organization to pledge its property and receive funds in return. It is used when a party pledges its property to another organization and needs to be protected against damages to the same. In return, the first party can get funds which can be used for various required purposes.

The agreement is needed where one party pledges his property and receives funds from the other one. Here the agreement makes sure both parties agree to the same terms and conditions. The agreement also enables the second party or organization which has provided the funds to take legal actions in case the first party is not able to repay the funds in time. The purpose of receiving the funds by the first party should also be declared in the agreement.

Inclusions in Indemnification and Pledge Agreement

The agreement includes all the details and signatures of both parties involved. The effective date is the date on which the agreement becomes applicable after both parties negotiate and agree on the requirements and responsibilities of the agreement. It applies in situations when there is damage to the pledged property or the party who has received funds does no repay in time.

How to Draft an Indemnification and Pledge Agreement

Drafting an indemnification and pledge agreement includes the following steps:

Benefits of Indemnification and Pledge Agreement

It is never advisable to depend on verbal commitments especially when properties are involved in a deal. So here are some of the benefits of indemnification and pledge agreement:

There can be many consequences of not having the agreement including if the first party doesn’t give the funds on time or there is damage to the property by the second party. In both cases, either of the parties can approach the court for justice.

The indemnification and pledge process requires many general and specific clauses to be added in the agreement including the following:

Sample for Indemnification and Pledge Agreement 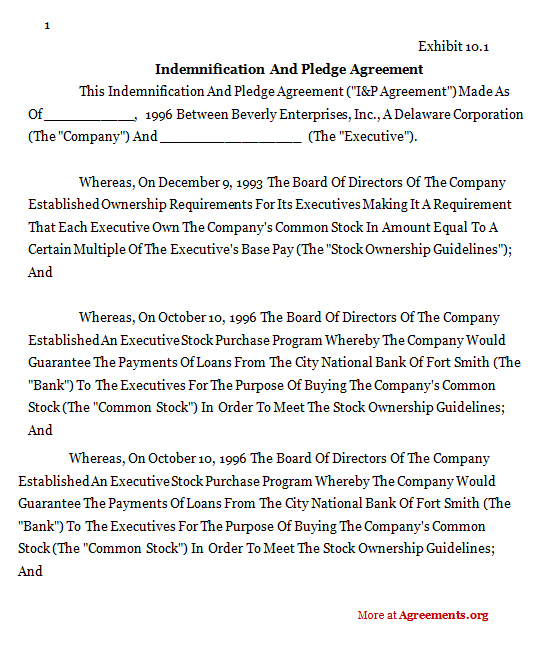