A guaranty agreement is an agreement that outlines the conditions under which guarantee is extended to the debtor. The legal definition of guarantee is an obligation undertaken by a third party to repay the loan of the debtor, which he owes to the creditor, in case he defaults or fails to pay. The third-party is called a guarantor. The debtor may be a person or a corporation. The agreement is signed only by the guarantor. However, it binds three parties – the creditor, debtor, and the guarantor.

The laws of most states mandated a guarantee agreement to be in writing and delivered to the creditor. It is generally governed by the law of contracts.

Purpose of a Guaranty Agreement

It serves as a security for the loan taken by the debtor. If the debtor fails to pay the amount, the creditor can recover it from the guarantor. A guaranty allows a borrower with a poor credit score to avail of a loan with the help of a guarantor who has good credit. In the absence of a guarantee, the former may not be able to get a loan from a lender. For lenders, it serves as a certainty that they will recover their amount. The guarantor may recover the amount from the debtor, depending on the agreement between them.

The following key terms must be incorporated in a Guaranty Agreement:

The different types of guaranty agreements are:

A template of a Guaranty Agreement can be downloaded from below. 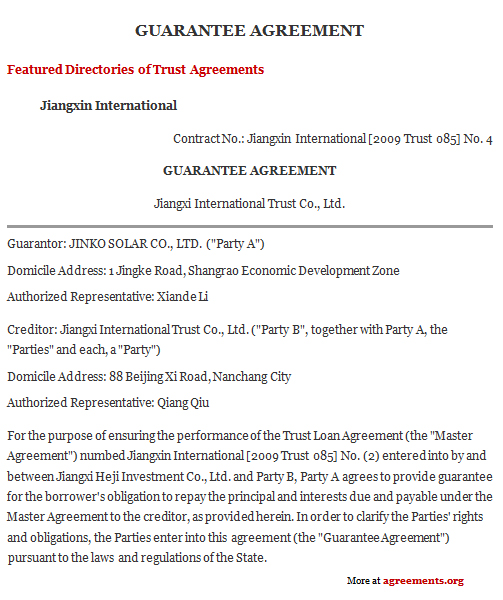