A Brief Introduction About the Forbearance Agreement

However, there comes a situation sometimes when the borrower is unable to make the payments, or he or she defaults. This could happen for various genuine reasons, too, such as unexpected expenses, unanticipated health issues, etc. In such a situation, if the lender decides not to impose foreclosure and decides to decrease mortgage payment or cancel it for a particular time, this agreement is drafted. Forbearance literally means holding something or refraining from the enforcement.

It then becomes the borrower’s responsibility to give the full payment at the end of the period, including other expenses such as tax, insurance, etc. A borrower must also agree for a Forbearance Agreement. These agreements depend on situations, borrowers, and lenders. Everyone can have their own ways of drafting this agreement. It contains all the information related to the forbearance.

The agreement is signed between two entities. One is known as the lender, and the other is the borrower. The lender can be an individual or an organization. In this agreement, the lender promises not to enforce the legal remedy that it has for default or no payment. The borrower also promises that after a certain period, he will make the full payment. The agreement legally protects both parties and spells out each entity’s responsibilities.

Purpose of the Forbearance Agreement – Why Do You Need It?

This agreement is not a solid solution for all default-related problems in the business of mortgage loan. However, it is a great remedy for borrowers who are unable to pay due to genuine reasons and unforeseeable financial troubles. Borrowers manage to buy more time to make the payments.

Here are some pointwise reasons to sign this agreement –

Contents of the Forbearance Agreement – Inclusions

Like most other lease agreements, the Forbearance Agreement also contains the basic details of the involved parties such as names, addresses, phone numbers, etc.

How to Draft the Forbearance Agreement?

Negotiations are one of the most crucial aspects of this agreement. The borrower has to do a lot of negotiations to duck the foreclosure and avoid additional costs such as taxes, insurance, interest rate, etc. A healthy relationship between both parties ensures that the borrower can take time for as long as his financial condition doesn’t allow him to pay the full loan. If the borrower’s credit history is not strong enough, he can convince the lender through negotiations.

Benefits & Drawbacks of the Forbearance Agreement

Here are some benefits of the agreement –

Here are some drawbacks of this agreement –

The provisions of the original loan agreement hold true even after this agreement is signed. Those provisions would mostly be about dispute resolution, governing laws, the result of defaults, etc. This agreement is also one that is legally binding that protects both parties. If the collateral is involved, upon default, the lender can own it. Both parties can also take the help of the court. Both parties should read the governing laws before signing the agreement to avoid any dispute or misunderstanding.

Key terms of the agreement vary depending on the situation and the lender. Depending on the key term, there can be different types of Forbearance Agreement. There is also Student Loan Forbearance, which is really common among other loan forbearance. This agreement is not a long-run solution, but for borrowers, it is a temporary relief. If drafted well, the agreement can be beneficial for both parties. Thus, it is important to draft the agreement very carefully. You can also take the help of an expert. 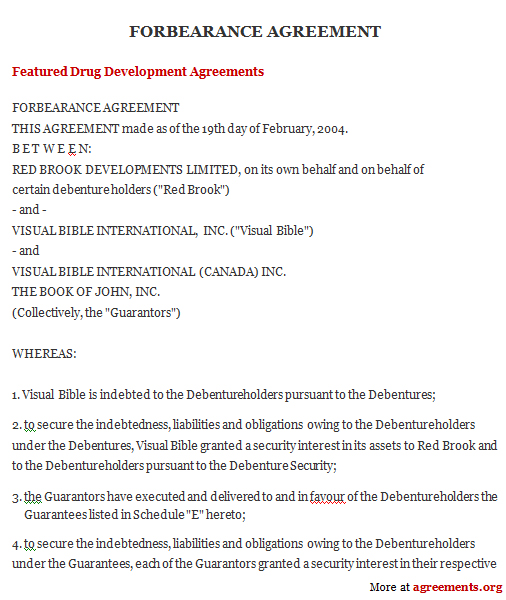