What Is the Federal Coal Lease Agreement?

Federal Coal Lease Agreement is the legal document that specifies the duties and rights of the federal government and the company the contract is leased out to. The agreement is drafted when the federal government plans on leasing the public land to the company for coal mining. The mining company would pay in terms of the tonnage extracted. The amount quoted for the lease land depends on the estimated tonnage available in the mine.

When Do You Need a Federal Coal Lease Agreement?

The Federal Government is considered the owner of all the national resources in an economy. Usually, the government offers certain public lands on a lease to the deserving companies to ensure the optimum use of natural resources. Basically, the federal government finds the deserving company through a bidding procedure. The company that places the best bid is handed over the particular land for coal excavation purposes for a specific duration.

How to Draft a Federal Coal Lease Agreement?

While drafting the agreement,

Since it is a government contract, many clauses are to be mentioned in the agreement. Below mentioned are the important clauses that must be specified clearly.

Should the company breach any term given in the contract, they will be subject to pay the compensation. Improper use of the public land, failure to pay royalties on time, and any other violation can result in contract termination. The company must read the contract thoroughly and sign it only if they agree to all the terms. In general, since the company is dealing with the federal government, any breach on its side could result in immediate termination or a notice for payment of compensatory damages to reconstruct the destroyed environment. This could be challenged in the court of law. However, before approaching the court, both parties agree on a course of action that is beneficial for both the partie.

The federal government has a legal obligation to ensure that it is not giving away federal coal at fire sale prices. We cannot go back and redo the last thirty years of the federal coal leasing programs, but neither should we accept the current broken system. We can do better with a Federal Coal Lease Agreement. 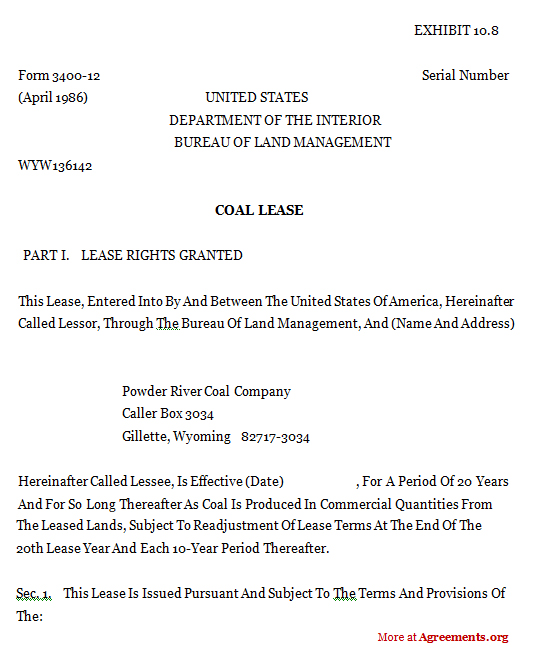