What Is a Facility Agreement?

A corporate loan is often called a ‘facility’ provided through the bank to the borrowing company, and so, a corporate loan agreement is also recognized as a facility agreement.

A facility agreement amid the bank and the borrower states the terms laid out in the term sheet in the form of a binding legal agreement. It comprises the details of the loan, the manner in which the loan would operate, and the terms and conditions that are required to be fulfilled by the parties towards the agreement.

When Do You Need a Facility Agreement?

Purpose of the Facility Agreement

A facility is an agreement between a corporation and a public or private lender that permits the business to borrow a specific sum of money for diverse purposes for a short period. The loan is for an agreed amount and doesn’t require collateral. The borrower makes monthly or quarterly payments, with interest, until the dues are paid in full.

A facility is particularly important for businesses that want to avoid things, for example, laying off workers, slowing growth, or closing down during seasonal sales cycles when revenue is lower.

The key terms a facility agreement would typically include:

A facility agreement might also comprise a guarantee if the borrower or its subsidiaries are to provide this form of credit support as well as the guarantee is not provided in a separate guarantee document or elsewhere.

Inclusions in a Facility Agreement

Parties involved: In the creation of this agreement, there are usually two parties involved; the first being bank and the second is the borrower.

How to Draft the Facility Agreement?

Each facility agreement is different and is drafted, keeping in mind the nature of the facility. Though there are several ways of drafting facility agreements, each of them could be divided into the following key sections—

A facility agreement would comprise provisions stating the facility being provided, which includes what type of facility it is. The most common types of loan facilities are:

Overdraft Services: Overdraft services offer a loan towards a company when the company’s cash account is empty. The lender charges interest as well as fees on the borrowed money. Overdraft services cost less than loans, are speedily completed, and do not contain penalties for an early payoff.

Term loans: A term loan is a commercial loan with a set interest rate as well as the maturity date. A corporation usually uses the money to finance a large investment or acquisition. Intermediate-term loans are under three years and are repaid monthly, possibly with balloon payments. Long-term loans could be up to 20 years and are backed by collateral.

Revolving credit: It has a particular limit and no set monthly payments, yet interest accrues and is capitalized. Corporations with low cash balances that require funding their networking capital needs would usually go for a revolving credit facility, which provides access to funds any time the business requirements capital.

Letters of Credit: Domestic and international trade corporations use letters of credit to facilitate transactions and payments. A financial institution assures payment and completion of duties between the applicant (buyer) and the beneficiary (seller).

What Happens of Violation?

There would also be an event of default provisions regarding breaches of the facilities agreement itself. These might allow time for remedy by a borrower, and might, in any case, only apply towards material breaches or breaches of the main agreement provisions. The non-payment default provision would usually contain a grace period to cover administrative or technical difficulties. Insolvency defaults are also required to contain appropriate grace periods and must comprise appropriate waivers for solvent reorganizations with the lender’s consent.

The lender must only have the right to demand repayment of the loan if an event of default has happened and is continuing. If the event of default were remedied or waived, then the lender’s right to accelerate must stop.

A sample of the Facility Agreement can be downloaded from below. 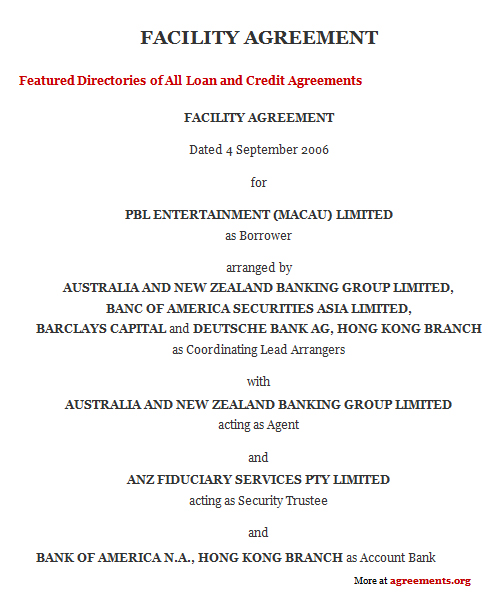