Purpose of an Exclusive Distribution Agreement?

An exclusive distribution agreement, has the effect of outsourcing a certain task of the supplier to externally engaged entity. This reduces cost, saves time and helps the company expand its business to new territories. Usually, the distributors who are engaged are specialized and expert personnel who have the desired skill to help the company sell its products and expand. Because, these distributors are externally engaged, the risk factors of expansion get offset and consequently mitigated.

Inclusion in an Exclusive Distribution Agreement?

An exclusive distribution contract needs to include the name of the parties, the commencement date, the duration or term of the agreement, registered office addresses of both the parties, their responsibilities, rights and obligations and standard boilerplate clauses such as dispute resolution, waiver, notices, remedies and severability.

Following are the key terms of an exclusive distribution agreement:

Drafting of an Exclusive Distribution Agreement?

The following guidelines need to be followed while drafting an exclusive distribution contract:

Types of an Exclusive Distribution Agreement?

Pros of an Exclusive Distribution Agreement?

An exclusive distribution agreement helps the supplier company to reach specific territories and market their products. It also enables them to adequately supervise the marketing activity. Any disputes which may arise should preferably be settled by mediation, arbitration and other such alternative methods of dispute resolution. 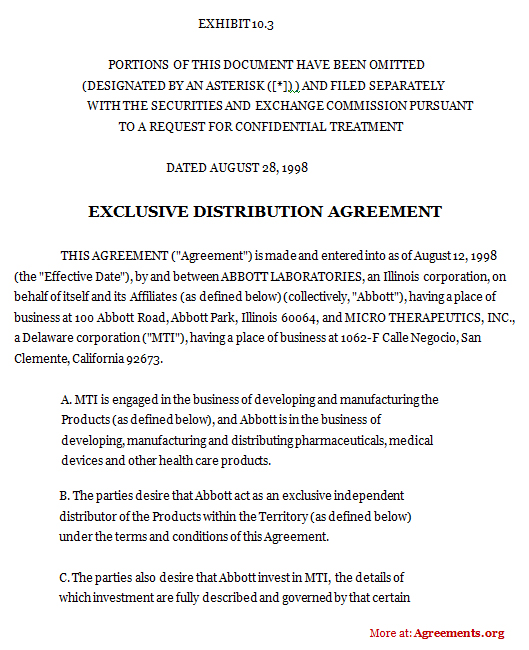