A Brief Introduction About the Escrow Agreement

The Escrow agreement is defined as a type of legal document that aims at outlining the specific terms & conditions between the involved parties, along with the responsibility of each party. While you search for ‘what is an escrow agreement,’ the agreements typically involve an independent third party referred to as the ‘escrow agent.’

Anything having some monetary value can be put in an escrow including:

Who Takes the Escrow Agreement?

These agreements serve to be useful in various business deals in which one party decides that it should only move forward in case it has assurances that the other party is able to fulfill the obligations. While dealing with this agreement, it is imperative for the parties to know how does escrow work, what is escrow payment, and so more.

In a typical agreement, the parties would agree that the buyer is able to place funds in escrow and provide detailed instructions on when & how to disburse the funds to the seller upon the arrival of the goods. Some of the qualified escrow agents, like the agents, tend to be bound by the terms of the agreement as well as the types of the agreement.

Purpose of the Escrow Agreement

These agreements are typically used in real estate transactions. In a typical agreement, the escrow payments are usually made to the respective escrow agents. In addition to real estate transactions, the purpose of this agreement can also be utilized in other fields. The agreement is known to set out specific terms & conditions by which an escrow agent will be holding and distributing the part of the purchase price that is placed in escrow to satisfy certain obligations related to the post-closing of the seller.

Contents of the Escrow Agreement

These agreements are known to outline the terms as well as conditions that are involved in the respective parties. The arrangement is usually made between three parties, including:

The agreements are usually known to contain the following key terms:

How to Draft the Escrow Agreement?

Benefits and Drawbacks of the Escrow Agreement

An escrow agreement using an escrow account –also referred to as the impound account, is known to benefit both the lender as well as the borrower. While the escrow account is primarily aimed at protecting the lender or the financial interests of the loan lending company, the borrowers are known to benefit from the same as well as helps them in insurance and tax-related tasks.

As far as the demerit is concerned, the mortgage lenders ask borrowers to cushion or prepay the escrow account during closing with a fixed amount of worth insurances or taxes for the month. The closer will be the due date for the tax payment; the more funds will be required by the lender –putting an additional burden on the finances.

The depository who is responsible for holding the property in the agreement (in escrow real estate transaction) for the respective parties is known to owe a duty of care as well as the responsibility to both the grantee as well as the grantor. In case of the violation or failure to abide by the specific terms of the given agreement might result in a lawsuit. The depository is responsible for abiding by the following rules:

However, both the grantee as well as the grantor might be held liable for the violation of the escrow agreement.

Escrow agreements are known to make sure that both parties in a typical transaction are able to hold up the respective end of the deal. In a typical escrow mortgage agreement, the escrow agent is responsible for overviewing the entire escrow process. However, in any transaction wherein you are putting some significant amount financially, it is recommended to possess a basic idea of the agreement and its terms & conditions to take advantage of the situation. 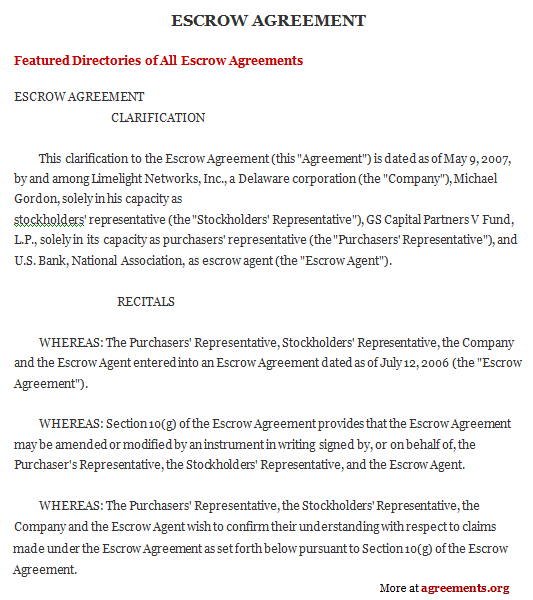