A drilling agreement is typically entered into between parties for the purposes of drilling an oil well. Such agreements are widely used in the oil and gas industry. Drilling an oil well is a costly and risky affair and hence it is advisable to have a written agreement in place. Detailed clauses pertaining to the type of agreement, financials, technicalities, etc. need to be incorporated. Owing to the complex nature of such agreements, standard forms of oil drilling contracts have been drawn up by various associations. For example, the American Petroleum Institute has drawn up a standard form of the drilling contract.

What is the Purpose of a Drilling Agreement?

A standard drilling contract is typically used by oil and gas companies for drilling oil wells. It systematizes and standardizes a risky, costly, time-taking activity. Having standard terms and conditions in place assures timely performance, quality check, and cost control. The contractor too is assured that his compensation would be made in accordance with the agreed terms. Moreover, drilling a well is subject to a lot of exigencies including unforeseen natural events. Having a proper contract in place protects both the parties from such events. It also makes dispute resolution between the parties a costly and less chaotic affair. The jurisdictional clause becomes important due to the international nature of the agreement and the work.

Inclusions in a Drilling Agreement

A drilling agreement is a complex agreement by virtue of the risk and financials involved. Apart from the commercial and operational terms, it is pertinent to include certain standard clauses which protect the interests of the parties. Such clauses inter alia include names of the parties, effective date, interpretations, jurisdiction, and severability.

The following key terms should be included in a standard drilling contract:

The following guidelines should be kept in mind while drafting a drilling agreement or contract:

The various types of drilling contracts are as follows:

Drilling contracts have the following benefits:

A drilling contract is typically used to drill oil wells. Sometimes such a contract may be entered into for the purposes of drilling other types of wells such as water wells. An oil well is usually required by oil companies. Such companies have an international nature of operations and hence, it becomes difficult to affix jurisdiction and choice of law in the event a dispute arises. Hence, the dispute resolution clause of a drilling contract is the most difficult to draft. Typically, arbitration is suggested as the preferred dispute resolution method in drilling contracts. 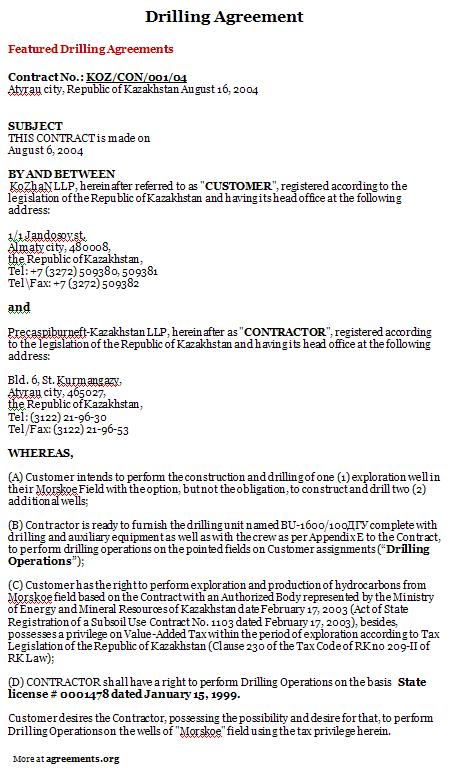