A Donation Agreement is created when a party wants to donate an asset to another party. Through this agreement, the donor agrees to make gratuitous disposal of a particular asset to another person or to a charitable organization. Such assets may include property, shares of a company or may even be cash. When the parties agree to document the various aspects of the promise of donation, it results in a donation agreement.

When Do You Need a Donation Agreement

The purpose of this agreement is to lay down the terms and conditions of the donation and how it will be given effect to. The agreement must set forth the expectations and understandings of both the parties. A written agreement helps to reduce the chances of misunderstandings between the parties and also makes the promise of donation by the donor a legally binding obligation. This helps to protect the interests of the donee.

Inclusions in a Donation Agreement

Apart from this, the agreement must clearly mention under which law it will be governed and how the agreement shall be terminated. The manner in which the agreement is to be modified should also be described to avoid any confusion in the future.

How to Draft a Donation Agreement

The following are the steps to follow while drafting an agreement:

Benefits of a Donation Agreement

Consequences of Not Having a Donation Agreement

Key Clauses in a Donation Agreement

What Happens When You Violate a Donation Agreement

In some cases, if a promise to make a future donation is not satisfied, the other party may enforce such promise through judicial action. For this it is necessary that the promise must be properly documented through a binding contract.

A well-drafted donation contract form will include a description of the investment in time and money or other prospective detriment that the organization is likely to incur by reliance on the promised donation.

A donation contract sample can be downloaded from below. 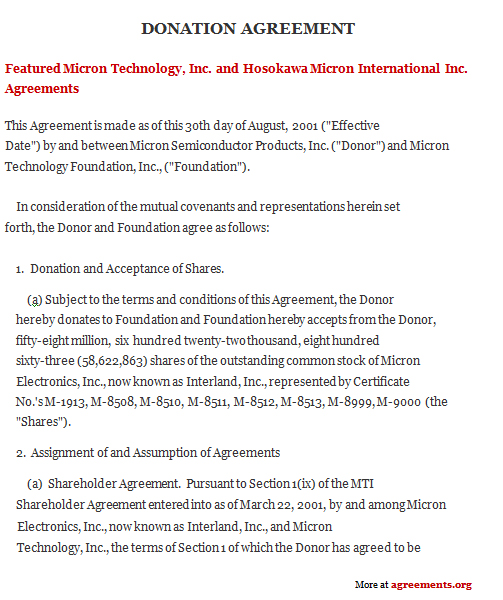