The director designation agreement is a legal bind to the law between the parties (company and investors) to regulate the rights over choosing or suggesting an appropriate candidate for the post of director of the firm. The shareholders of the company and the investors control the firm’s director designation rights. The agreement explains the various aspects of the posts comprising a name, the position of the company, terms, conditions, duties, remuneration, rewards, and responsibilities.

Various forms and names that the director agreement can take are:

When Do You Need Director Designation Agreement?

The directors are the people who govern the company and its management, managing all the company’s business. They have the right to make decisions regarding the company’s development.

The director designation involving the company’s incorporation states the obligations of the shareholders, investors, and board of directors. The requirements comprise of approving the nominated candidates, voting, mentioning the period and remuneration for the designation. The voting process explains to the shareholders, their part before electing the nominee designation for the director. Earlier, the shareholders engaged in the decision-making process of the company. But the board of directors should have the full rights and responsibilities to implement the decisions and enacting new rules for the company.

How to Draft Director Designation Agreement?

Some significant commitments of directors’ designation should be incorporated in agreement. These are:

Refer to the form provided below for a better understanding of the Director Designation Agreement. You can download a PDF or Doc form of the agreement and customize it accordingly.

Download a board of director designation agreement template now! 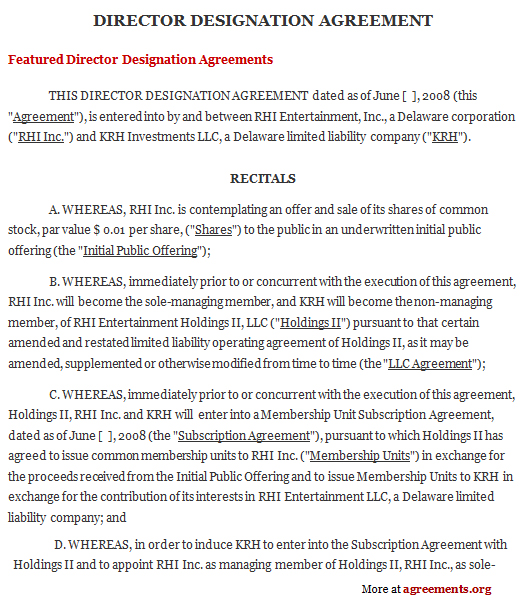